Thoughts on the Necessity of Improving the Condition of the Slaves in the British Colonies With a View to Their Ultimate Emancipation; and on the Practicability, the Safety, and the Advantages of the Latter Measure. 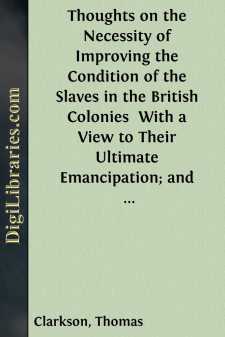 I know of no subject, where humanity and justice, as well as public and private interest, would be more intimately united than in that, which should recommend a mitigation of the slavery, with a view afterwards to the emancipation of the Negroes, wherever such may be held in bondage. This subject was taken up for consideration, so early as when the Abolition of the slave trade was first practically thought of, and by the very persons who first publicly embarked in that cause in England; but it was at length abandoned by them, not on the ground that Slavery was less cruel, or wicked, or impolitic, than the slave trade, but for other reasons. In the first place there were not at that time so many obstacles in the way of the Abolition, as of the Emancipation of the Negroes. In the second place Abolition could be effected immediately, and with but comparatively little loss, and no danger. Emancipation, on the other hand, appeared to be rather a work of time. It was beset too with many difficulties, which required deep consideration, and which, if not treated with great caution and prudence, threatened the most alarming results. In the third place, it was supposed, that, by effecting the abolition of the slave trade, the axe would be laid to the root of the whole evil; so that by cutting off the more vital part of it, the other would gradually die away:вЂ”for what was more reasonable than to suppose, that, when masters could no longer obtain Slaves from Africa or elsewhere, they would be compelled individually, by a sort of inevitable necessity, or a fear of consequences, or by a sense of their own interest, to take better care of those whom they might then have in their possession? What was more reasonable to suppose, than that the different legislatures themselves, moved also by the same necessity, would immediately interfere, without even the loss of a day, and so alter and amend the laws relative to the treatment of Slaves, as to enforce that as a public duty, which it would be thus the private interest of individuals to perform? Was it not also reasonable to suppose that a system of better treatment, thus begun by individuals, and enforced directly afterwards by law, would produce more willing as well as more able and valuable labourers than before; and that this effect, when once visible, would again lead both masters and legislators on the score of interest to treat their slaves still more like men; nay, at length to give them even privileges; and thus to elevate their condition by degrees, till at length it would be no difficult task, and no mighty transition, to pass them to that most advantageous situation to both parties, the rank of Free Men?

These were the three effects, which the simple measure of the abolition of the slave trade was expected to produce by those, who first espoused it, by Mr. Granville Sharp, and those who formed the London committee; and by Mr. Pitt, Mr. Fox, Mr. Burke, Mr. Wilberforce, and others of illustrious name, who brought the subject before Parliament....