The Sot-weed Factor: or, A Voyage to Maryland. A Satyr. In which is Describ'd The Laws, Government, Courts and Constitutions of the Country, and also the Buildings, Feasts, Frolicks, Entertainments and Drunken Humours of the Inhabitants of that Part of America. In Burlesque Verse. 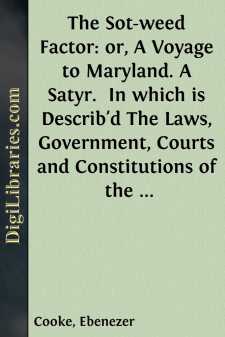 e have no means of knowing the history of Master "Ebenezer Cook, Gentleman," who, one hundred and forty-six years ago, produced the Sot-Weed Factor's Voyage to Maryland. He wrote, printed, published, and sold it in London for sixpence sterling, and then disappeared forever. We do not know certainly that Mr. Cook himself was the actual adventurer who suffered the ills described by him "in burlesque verse." Indeed, "Eben: Cook, Gent." may be a myth—a nom de plume. Yet, there is a certain personal poignancy and earnestness about the whole Story that almost forbid the idea of a secondhand narrative. Nay, I think it extremely probable that it was "Eben: Cook, Gent." or, some other equally afflicted gentleman assuming that name, who—

fled from his native land to become a Sot-Weed factor in America.

The adventures and manners described are ludicrous and certainly very unpolished. Although Mr. Cook calls his poem "A Satyr," there is, in his account of early habits in Maryland, so much resemblance to what we observe in the rude society of all new settlements, that it is possible the story is not so much a Satire as a hightened description of what an unlucky traveler found in certain quarters of the colony, Anno Domini, 1700. When "Mr. Cook," with an anathema in his mouth, makes a final bow to his readers, he expressly adds, in a note, on the last page, that "the Author does not intend by this any of the English Gentlemen resident there;" still, excepting even all these select personages, he doubtless found un-gentlefolk enough among the rough farmers and fishermen of obscure "Piscato-way" and the adjacent country, to justify his discontent. At all events, we may, I imagine, very reasonably suppose "Eben: Cook" to have been a London "Gent:" rather decayed by fast living, sent abroad to see the world and be tamed by it, who very soon discovered that Lord Baltimore's Colony was not the court of her Majesty Queen Anne, or its taverns frequented by Addison and the wits; and whose disgust became supreme when he was "finished" on the "Eastern-Shoar," by

who, taking advantage of his incapacity for trade, cheated him out of his cargo and sent him home without a leaf of the coveted "Sot-weed!" This poem is, very likely, the result of that homeward voyage. With proper allowance for breadth and burlesque, angry exaggeration and the discomforts of such a "Gentleman" as we may fancy Master Cook to have been, it is well worth preservation as hinting, if not photographing, the manners and customs of the ruder classes in a British Province a century and a half ago.

The "Sot-Weed Factor" was first printed in London, in 1708, in a folio of twenty-one pages. It was reprinted, with a poem on Bacon's Rebellion, by Mr. Green, at Annapolis, Maryland, in 1731. Mr. Green cautiously reminds the reader that it was a description written twenty years before, and "did not agree with the condition of Annapolis at the time of its publication!"

The edition, now published, is taken from the London copy of 1708, as "Printed and sold by B. Bragg, at the Raven, in Pater-Noster-row (price 6d.)"

In Stevens's Bibliotheca Americana, 1861, we find the following title: "Sot-Weed Redivivus; or the Planters Looking-Glass. In Burlesque Verse, Calculated for the Meridian of Maryland, by E. C. Gent: Annapolis; William Parks, for the Author. 1730. viii and text 28 pp. 4°." Mr. Stevens describes the book as "alike curious as an early specimen of printing in Maryland, and as an example of American poetry."

"E. C. Gent:" of 1730, at Annapolis, may be the "Ebenezer Cook, Gent:" of London, 1708,—"redivivus,"—returned to America and turned Author again at Annapolis, under the auspices of our early Colonial printer, William Parks....