The School of Recreation (1696 edition) Or a Guide to the Most Ingenious Exercises of Hunting, Riding, Racing, Fireworks, Military Discipline, The Science of Defence 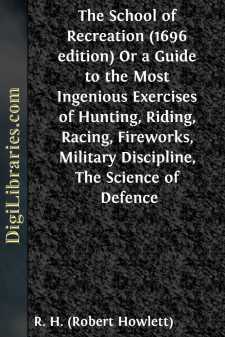 Hunting, being a Recreation that challenges the sublime Epithets of Royal, Artificial, Manly, and Warlike, for its Stateliness, Cunning, and Indurance, claims above all other Sports the Precedency; and therefore I was induced to place it at the Head to usher in the rest.

But to come to the Purpose: The young Hunter, as yet raw in the true Knowledge of this Royal Sport, with what is meerly necessary and useful, without amusing him with superfluous Observations for his Instruction: I shall therefore observe throughout this Treatise this Method: 1. The several Chases or Games which fall under the First Denomination, Hunting. 2. The genuine of Infallible Rules whereby we are to direct our selves, for the obtaining the true Pleasure in prosecuting the same, and the desired Effects of it.

Know than; the Beasts of Venery or Forest, are, viz. The Hart, Hinde, Hare.

As likewise the Wild Beasts, or Beasts of Chace are, viz. the Buck, Doe, Fox, Marten, Roe.

The Beasts of Warren, are, viz. Hares, Coneys, Roes.

Note, The Hart and Hind before spoken of, though they are of one kind, yet, because their Seasons are several, are esteemed distinct Beasts; and in the Hart is included the Stag, and all red Deer of Antlier.

And because I reckon it the most necessary part of the Hunter to understand the Names, Degrees, Ages, and Seasons of the aforesaid different Beasts of Forest or Venery, Chase, and Warren, I therefore, present him with these following

The Marten, the first Year A Cub, 2 A Marten.

As for the Beasts of Warren, the Hare being spoken of before, little or nothing is to be said. The Coney is first A Rabbet, and then an Old Coney.

Thus much for their Names, Degrees, and Ages: Now let us next observe their proper Seasons for Hunting.

The Hart or Buck, beginneth fifteen days after Mid-Summer-Day, and lasteth till Holy-Rood-Day.

The Fox, from Christmass, and lasteth till the Annunciation of the Blessed Virgin Mary.

The Hind or Doe, from Holy-Rood-Day, till Candlemas.

The Roe-Buck, from Easter, till Michaelmas.

The Roe, from Michaelmas, till Candlemas.

The Hare, from Michaelmas, to the end of February.

Thus much I thought fit to speak briefly of the proper Names, Degrees, Ages, and Seasons of the several Chases which we Hunt: But having almost forgot some, I shall insert here, as intending to speak somewhat of them, and they are the Badger, Otter, and Wild Goat.

As for the Terms of Art appropriated to Hunting. And now I bring you to the second thing I proposed, viz. the Rules and Measures we are to learn and observe in the aforementioned Sports or Chases; and in this we must begin with the Pursuers or Conquerors of these Chases, namely.

There are several kinds of Hounds, endued with Qualities suitable to the Country where they are bred; and therefore consult his Country, and you will soon understand his Nature and Use: As for instance, the Western Countries of England, and Wood-land, Mountainous Countries, as also Cheshire, and Lancashire, breed the slow-Hound; a large great Dog, tall and heavy. Worcestershire, Bedfordshire, and many other well mixt Soyls, where the Champaign and Covert are equally large, produce the Middle sized Dog, of a more nimble Composure than the fore-mentioned, and fitter for Chase. Yorkshire, Cumberland, Northumberland, and the North parts, breed the Light, Nimble, swift slender Dog. And our open Champaigns train up excellent Grey-Hounds, hugely admired for his Swiftness, Strength, and Sagacity....