The Life of George Washington, Vol. 2 Commander in Chief of the American Forces During the War which Established the Independence of his Country and First President of the United States 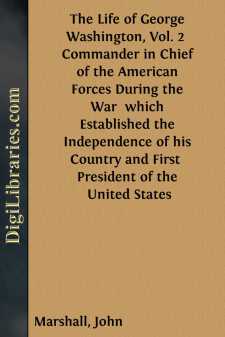 Birth of Mr. Washington.... His mission to the French on the Ohio.... Appointed Lieutenant Colonel of a regiment of regular troops.... Surprises Monsieur Jumonville.... Capitulation of fort Necessity.... Is appointed aid-de-camp to General Braddock.... Defeat and death of that general.... Is appointed to the command of a regiment.... Extreme distress of the frontiers, and exertions of Colonel Washington to augment the regular forces of the colony.... Expedition against fort Du Quesne.... Defeat of Major Grant.... Fort Du Quesne evacuated by the French, and taken possession of by the English.... Resignation of Colonel Washington.... His marriage.

George Washington, the third son of Augustine Washington, was born on the 22d of February, 1732, near the banks of the Potowmac, in the county of Westmoreland, in Virginia. His father first married Miss Butler, who died in 1728; leaving two sons, Lawrence and Augustine. In 1730, he intermarried with Miss Mary Ball, by whom he had four sons, George, John, Samuel and Charles; and one daughter, Betty, who intermarried with Colonel Fielding Lewis, of Fredericksburg.

His great grandfather, John Washington, a gentleman of a respectable family, had emigrated from the north of England about the year 1657, and settled on the place where Mr. Washington was born.

At the age of ten years he lost his father. Deprived of one parent, he became an object of more assiduous attention to the other; who continued to impress those principles of religion and virtue on his tender mind, which constituted the solid basis of a character that was maintained through all the trying vicissitudes of an eventful life. But his education was limited to those subjects, in which alone the sons of gentlemen, of moderate fortune, were, at that time, generally instructed. It was confined to acquisitions strictly useful, not even extending to foreign languages.

In 1743, his eldest brother intermarried with the daughter of the Honourable George William Fairfax, then a member of the council; and this connexion introduced Mr. Washington to Lord Fairfax, the proprietor of the Northern Neck of Virginia, who offered him, when in his eighteenth year, an appointment as surveyor, in the western part of that territory. His patrimonial estate being inconsiderable, this appointment was readily accepted; and in the performance of its duties, he acquired that information respecting vacant lands, and formed those opinions concerning their future value, which afterwards contributed greatly to the increase of his private fortune.

Those powerful attractions which the profession of arms presents to young and ardent minds, possessed their full influence over Mr. Washington. Stimulated by the enthusiasm of military genius, to take part in the war in which Great Britain was then engaged, he had pressed so earnestly to enter into the navy, that, at the age of fifteen, a midshipman's warrant was obtained for him. The interference of a timid and affectionate mother deferred the commencement, and changed the direction of his military career. Four years afterwards, at a time when the militia were to be trained for actual service, he was appointed one of the Adjutants General of Virginia, with the rank of Major. The duties annexed to this office soon yielded to others of a more interesting character.

France was beginning to develop the vast plan of connecting her extensive dominions in America, by uniting Canada with Louisiana. The troops of that nation had taken possession of a tract of country claimed by Virginia, and had commenced a line of posts, to be extended from the Lakes to the Ohio....