The Life of George Washington, Vol. 1 Commander in Chief of the American Forces During the War which Established the Independence of his Country and First President of the United States 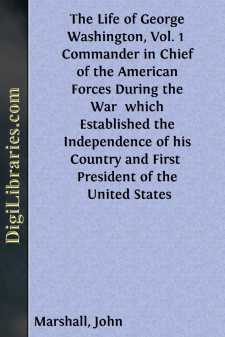 Commission of Cabot.... His voyage to America.... Views of discovery relinquished by Henry VII.... Resumed by Elizabeth.... Letters patent to Sir Humphry Gilbert.... His voyages and death.... Patent to Sir Walter Raleigh.... Voyage of Sir Richard Grenville.... Colonists carried back to England by Drake.... Grenville arrives with other colonists.... They are left on Roanoke Island.... Are destroyed by the Indians.... Arrival of John White.... He returns to England for succour.... Raleigh assigns his patent.... Patent to Sir Thomas Gates and others.... Code of laws for the proposed colony drawn up by the King.

The United States of America extend, on the Atlantic, from the bay of Passamaquoddi in the 45th, to Cape Florida in the 25th, degree of north latitude; and thence, on the gulf of Mexico, including the small adjacent islands to the mouth of the Sabine, in the 17th degree of west longitude from Washington. From the mouth of the Sabine to the Rocky mountains, they are separated from Spanish America by a line which pursues an irregular north-western direction to the 42d degree of north latitude, whence it proceeds west, to the Pacific. On the north they are bounded by the British provinces; from which, between the Lake of the Woods and the Rocky, or Stony mountains, they are separated by the 49th parallel of north latitude. Their northern boundary, west of these mountains, has not yet been adjusted.

The extent of this vast Republic, in consequence of its recent acquisition of almost unexplored territory, has not yet been accurately ascertained; but may be stated at two millions of square miles.

Its population, which began on the Atlantic, and is travelling rapidly westward, amounted in 1820, according to the census of that year, to nine millions six hundred and fifty-four thousand four hundred and fifteen persons. The enumerations which have been made under the authority of government, show an augmentation of numbers at the rate of about thirty-four per centum in ten years; and it is probable, that for many years to come, this ratio will not be materially changed.

Public sentiment, to which the policy of the government conforms, is opposed to a large military establishment; and the distance of the United States from the great powers of the world, protects them from the danger to which this policy might otherwise expose them.

The navy has become an object of great interest to the nation, and may be expected to grow with its resources. In April 1816, Congress passed an act appropriating one million of dollars annually, to its gradual increase; and authorising the construction of nine ships, to rate not less than seventy-four guns each, and of twelve, to rate not less than forty-four guns each.

The execution of this act is in rapid progress. Inconsiderable as the navy now is, with respect to the number and force of its ships, it is deemed inferior to none in existence for the bravery and skill of its officers and men. When we take into view the extensive sea coast of the United States, the magnificent lakes, or inland seas, which form a considerable part of their northern frontier, the abundance of their materials for ship building, and the genius of their population for maritime enterprise, it is not easy to resist the conviction that this bulwark of defence will, at no very distant period, attain a size and strength sufficient to ensure the safety of the nation and the respect of the world.

The net revenue of the United States amounted, in the year 1822, to considerably more than twenty millions of dollars; and, unless a course of legislation unfavourable to its augmentation be adopted, must grow with their population.

In arts, in arms, and in power, they have advanced, and are advancing, with unexampled rapidity.

The history of their progress, from the first feeble settlements made by Europeans on a savage coast, to their present state of greatness; while it has just claims to the attention of the curious of all nations, may be expected deeply to interest every American.

Soon after the return of Columbus from that memorable voyage which opened the vast regions of the west to civilized man, the maritime states of Europe manifested a desire to share with Spain, the glory, the wealth, and the dominion to be acquired in the new world. By no one of these states, was this desire carried into action more promptly than by England, Henry VII. had received communications from Columbus, during the tedious and uncertain negotiations of that great man, at the dilatory court of Ferdinand, which prepared him for the important discoveries afterwards made, and inclined him to countenance the propositions of his own subjects for engaging in similar adventures. Commission of Cabot.On the 5th of March 1495, he granted a commission to John Cabot, an enterprising Venetian who had settled in Bristol, and to his three sons, Lewis, Sebastian, and Sanctius, empowering them, or either of them, to sail under the banner of England, towards the east, north, or west, in order to discover countries unoccupied by any Christian state, and to take possession of them in his name....