The Last Journals of David Livingstone, in Central Africa, from 1865 to His Death, Volume II (of 2), 1869-1873 Continued By A Narrative Of His Last Moments And Sufferings, Obtained From His Faithful Servants Chuma And Susi 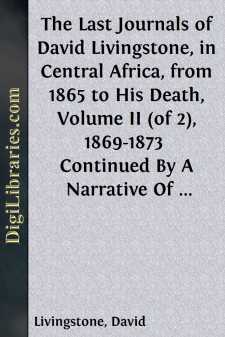 [The new year opened badly enough, and from letters he wrote subsequently concerning the illness which now attacked him, we gather that it left evils behind, from which he never quite recovered. The following entries were made after he regained sufficient strength, but we see how short they necessarily were, and what labour it was to make the jottings which relate to his progress towards the western shore of Lake Tanganyika. He was not able at any time during this seizure to continue the minute maps of the country in his pocket-books, which for the first time fail here.]

1st January, 1869.—I have been wet times without number, but the wetting of yesterday was once too often: I felt very ill, but fearing that the Lofuko might flood, I resolved to cross it. Cold up to the waist, which made me worse, but I went on for 2-1/2 hours E.

3rd January, 1869.—I marched one hour, but found I was too ill to go further. Moving is always good in fever; now I had a pain in the chest, and rust of iron sputa: my lungs, my strongest part, were thus affected. We crossed a rill and built sheds, but I lost count of the days of the week and month after this. Very ill all over.

About 7th January, 1869.—Cannot walk: Pneumonia of right lung, and I cough all day and all night: sputa rust of iron and bloody: distressing weakness. Ideas flow through the mind with great rapidity and vividness, in groups of twos and threes: if I look at any piece of wood, the bark seems covered over with figures and faces of men, and they remain, though I look away and turn to the same spot again. I saw myself lying dead in the way to Ujiji, and all the letters I expected there useless. When I think of my children and friends, the lines ring through my head perpetually:

"I shall look into your faces,And listen to what you say,And be often very near youWhen you think I'm far away."

Mohamad Bogharib came up, and I have got a cupper, who cupped my chest.

8th and 9th January, 1869.—Mohamad Bogharib offered to carry me. I am so weak I can scarcely speak. We are in Marungu proper now—a pretty but steeply-undulating country. This is the first time in my life I have been carried in illness, but I cannot raise myself to the sitting posture. No food except a little gruel. Great distress in coughing all night long; feet swelled and sore. I am carried four hours each day on a kitanda or frame, like a cot; carried eight hours one day. Then sleep in a deep ravine. Next day six hours, over volcanic tufa; very rough. We seem near the brim of Tanganyika. Sixteen days of illness. May be 23rd of January; it is 5th of lunar month. Country very undulating; it is perpetually up and down. Soil red, and rich knolls of every size and form. Trees few. Erythrinas abound; so do elephants. Carried eight hours yesterday to a chief's village. Small sharp thorns hurt the men's feet, and so does the roughness of the ground. Though there is so much slope, water does not run quickly off Marungu. A compact mountain-range flanks the undulating country through which we passed, and may stop the water flowing. Mohamad Bogharib is very kind to me in my extreme weakness; but carriage is painful; head down and feet up alternates with feet down and head up; jolted up and down and sideways—changing shoulders involves a toss from one side to the other of the kitanda. The sun is vertical, blistering any part of the skin exposed, and I try to shelter my face and head as well as I can with a bunch of leaves, but it is dreadfully fatiguing in my weakness.

I had a severe relapse after a very hot day. Mohamad gave me medicines; one was a sharp purgative, the others intended for the cure of the cough.