The Greatest Highway in the World Historical, Industrial and Descriptive Information of the Towns, Cities and Country Passed Through Between New York and Chicago Via the New York Central Lines. Based on the Encyclopaedia Britannica. 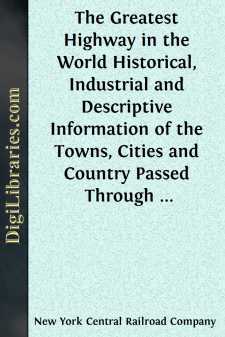 In furtherance of giving the utmost service to the public, the New York Central Lines asked the editors of the Encyclopædia Britannica to prepare this booklet descriptive of and vivifying the historical development of what has been termed "The Greatest Highway in the World."

It is presented to you in the hope that it may prove a pleasant companion on a journey over our Lines. The information will afford a new appreciation of the historical significance and industrial importance of the cities, towns and country which the New York Central Lines serve.

The New York Central Lines enter twelve states and serve territory containing 51,530,784 inhabitants or 50.3 per cent of the nation's population. This rich and busy territory produces 64 per cent of the country's manufactured products and mines a similar proportion of its coal.

This system does approximately 10 per cent of the railroad transportation business of the United States, although its main-track mileage is only 6 per cent. In other words the business it handles exceeds that of the average railroad, mile for mile, by nearly 100 per cent. The New York Central carries 52 per cent of all through passengers between New York and Chicago, the remaining 48 per cent being divided among five other lines. The freight traffic of the New York Central Lines in 1920 was greater than that carried by all the railroads of France and England combined.

The scenes that stretch before the eyes of passengers on these Lines are rich with historic interest. Few persons know that the second settlement in the United States was at Albany and that it antedated Plymouth by several years. Probably fewer persons know that the first United States flag was carried in battle at Fort Stanwix, now the city of Rome, N.Y. We hope that the reader will discover in the following pages more than one historic shrine which he will wish to visit.

It has been said that the history of a country's civilization is the history of its highways. Certainly the development of a great system such as the New York Central is an important element in the progress and prosperity of the country which it serves. This railroad is, in fact, a public institution, and it will prosper to the extent that it gives service to the public.

The New York Central Lines have the initial advantage that they follow the great natural routes along which the first trails were blazed by the red men, and are almost free from grades, sharp curves and other hindrances to comfortable and efficient transportation. Thus the road owes its superiority primarily to the fact that it lends itself to a maximum degree of efficiency.

But service as it is conceived by the New York Central, involves many aspects. One is the careful provision for the comfort and convenience of passengers; another is adequate and efficient facilities for serving the interests of shippers. In other words, New York Central service means not only fast and luxurious passenger trains, but also the rapid handling of freight. To give such service requires the highest class of equipment—the best rails, the finest cars, the most powerful locomotives, etc.—but it also requires an operating force of loyal, highly trained employees. In both respects the New York Central Lines excel.

The inspiring record of the system's growth through public approval and patronage is fundamentally a tribute to the service rendered, constantly advanced and developed in pace with public requirements. The accompanying booklet is in one sense an expression of past achievement, but it is also an earnest of greater accomplishment to come.

[1. Throughout this handbook the time is given at which trains are scheduled to leave or pass through the cities or towns mentioned. From New York to Chicago, Train No. 51 is the Empire State Express; No. 3, the Chicago Express; No. 41, The Number Forty-one; No. 25, the Twentieth Century, and No. 19, the Lake Shore Limited. In the reverse route, from Chicago to New York, No. 6 is the Fifth Avenue Special; No. 26 is the Twentieth Century; No. 16, the New York and New England Special, and No. 22, the Lake Shore Limited. The time given is Eastern Standard Time at all points east of Toledo, and Central Standard Time, which is one hour slower, at Toledo and all points west. (When Daylight Saving Time is adopted during the summer it is one hour faster than Standard time, but all time given in this booklet is Standard time.) The time between 12.01 o'clock midnight and 12.00 o'clock noon is indicated by light face type; between 12.01 o'clock noon and 12.00 o'clock midnight by dark face type. The use of an asterisk (*) indicates places recommended as especially worth visiting. Population figures are those of the 1920 U.S. Census.]

Fifty years ago when Commodore Vanderbilt began the first Grand Central Station—depot, they called it, in the language of the day—he made one error of judgment. His choice of a site proved to be magnificently right, though he selected a spot that was practically open country, then technically known as 42nd St. The story goes—it is a typically American story—that his friends laughed at him, remarking that a person might as well walk to Boston or Albany as go away up to 42nd St. to take a train for those cities. But the people did come, and they admired the commodore's new station, which is perhaps not surprising, since the commodore had set himself to build the greatest terminal in the world. Many Americans considered the new "depot" as only second to the capitol at Washington, and it served as an excellent show place when visitors came to town. Europe might have its cathedrals, but it had no Grand Central Station!

The commodore's one mistake lay in thinking that his fine new station would last a century. Within ten years an addition had to be built; in 1898 it had to be entirely remodeled and enlarged, and fifteen years later it was entirely demolished to make way for the present building which would be adequate for handling the city's ever-increasing millions.

There seems to be little doubt that the city of N.Y. and its environs has become within the last decade larger even than London. The population of greater London (including all the separate administrative entities within the Metropolitan Police District) is estimated at 7,435,379. Jersey City, Hoboken, and the other N.J. cities on the west, as well as Yonkers, Mt....