The Ghost in the White House Some suggestions as to how a hundred million people (who are supposed in a vague, helpless way to haunt the white house) can make themselves felt with a president, how they can back him up, express themselves to him, be expressed by him, and get what they want 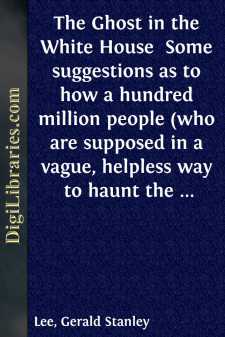 The Crowd is my Hero.

The Hero of this book is a hundred million people.

I have come to have the feeling—especially in regard to political conventions, that it might not be amiss to put forward some suggestions just now as to how a hundred million people can strike—make themselves more substantial, more important in this country, so that we shall really have in this country in time a hundred million people who, taken as a whole, feel important in it—like a Senator for instance—like Senator Lodge, like sugar even, or like meat or like oil, like Trusts that won't trust, and Congressmen that won't play and workmen that won't work—I am thinking out ways in this book in which the hundred million people can come to feel as if it made a very substantial difference to somebody what they wanted and what they thought—ways in which the hundred million people shall be taken seriously in their own country, and like a Profiteer, or like a noble agitator, or like a free beautiful labor union,—get what they want.

THE LONESOMEST JOB ON EARTH

What is going to happen to the next President the day after he is inaugurated, a few minutes after it, when he goes to the place assigned to him, or at least that night?

The Ghost in the White House.

The White House is haunted by a vague, helpless abstraction, a kind of ghost of a nation, called the people.

The only way the Nation, in the White House, gets in, is as a spirit. The man who lives there, if he wants to be chummy (as any man we want there would), has to commune with a Generalization.

What we really do with a President is to pick him deliberately up out of his warm human living with the rest of us, with people who, whatever else is the matter with them, are at least somebody in particular, lift him over in the White House, shut him up there for four years to live in wedlock with An Average, to be the consort day and night of Her Who Never Was, and Who Never Is—a kind of vague, cold, intellectual, unsubstantial, lonely, Terrible Angel called the People.

Just a kind of light in Her eyes at times.

That is all there is to Her.

It is a good deal like reducing or trying to reduce the Aurora Borealis to 2 and 2 = 4, to go into the White House for four years, warm up to this cold, passionately talked about, passionately believed in Lady. It does not give any real satisfaction to anybody—either to the hundred million people or to the President.

It certainly is not a pleasant or thoughtful thing for a hundred million people to do to a President—to be a Ghost.

It is not efficient.

THE PRESIDENT AND THE GHOST

There are a number of things about going into the White House the next four years and being the Head Employee of a hundred million people, that are going to make it, unless people do something about it, the lonesomest job on earth.

The new President on entering the mansion and taking up his position as the Head Employee of the hundred million people is going to find he is expected to put up, and put up every day, with marked and embarrassing idiosyncrasies or personal traits in his Employer, that no man would ever put up with, from any other employer in the world....