The Cliff Ruins of Canyon de Chelly, Arizona Sixteenth Annual Report of the Bureau of Ethnology to the Secretary of the Smithsonian Institution, 1894-95, Government Printing Office, Washington, 1897, pages 73-198 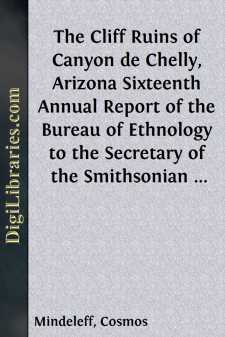 Although Canyon de Chelly is one of the best cliff-ruin regions of the United States, it is not easily accessible and is practically unknown. At the time of the conquest of this country by the "Army of the West" in 1846, and of the rush to California in 1849, vague rumors were current of wonderful "cities" built in the cliffs, but the position of the canyon in the heart of the Navaho country apparently prevented exploration. In 1849 it was found necessary to make a demonstration against these Indians, and an expedition was sent out under the command of Colonel Washington, then governor of New Mexico. A detachment of troops set out from Santa Fé, and was accompanied by Lieutenant (afterward General) J. H. Simpson, of the topographical engineers, to whose indefatigable zeal for investigation and carefulness of observation much credit is due. He was much interested in the archeology of the country passed over and his descriptions are remarkable for their freedom from the exaggerations and erroneous observations which characterize many of the publications of that period. His journal was published by Congress the next year and was also printed privately.

The expedition camped in the Chin Lee valley outside of Canyon de Chelly, and Lieutenant Simpson made a side trip into the canyon itself. He mentions ruins noticed by him at 4½, 5, and 7 miles from the mouth; the latter, the ruin subsequently known as Casa Blanca, he describes at some length. He also gives an illustration drawn by R. H. Kern, which is very bad, and pictures some pottery fragments found near or in the ruin. The name De Chelly was apparently used before this time. Simpson obtained its orthography from Vigil, secretary of the province (of New Mexico), who told him it was of Indian origin and was pronounced chay-e. Possibly it was derived from the Navaho name of the place, Tsé-gi.

Simpson's description, although very brief, formed the basis of all the succeeding accounts for the next thirty years. The Pacific railroad surveys, which added so much to our knowledge of the Southwest, did not touch this field. In 1860 the Abbé Domenech published his "Deserts of North America," which contains a reference to Casa Blanca ruin, but his knowledge was apparently derived wholly from Simpson. None of the assistants of the Hayden Survey actually penetrated the canyon, but one of them, W. H. Jackson, examined and described some ruins on the Rio de Chelly, in the lower Chin Lee valley. But in an article in Scribner's Magazine for December, 1878, Emma C. Hardacre published a number of descriptions and illustrations derived from the Hayden corps, among others figures one entitled "Ruins in Cañon de Chelly," from a drawing by Thomas Moran. The ruin can not be identified from the drawing.

This article is worth more than a passing notice, as it not only illustrates the extent of knowledge of the ruins at that time (1878), but probably had much to do with disseminating and making current erroneous inferences which survive to this day....