The Campaign of 1776 around New York and Brooklyn Including a new and circumstantial account of the battle of Long island and the loss of New York, with a review of events to the close of the year 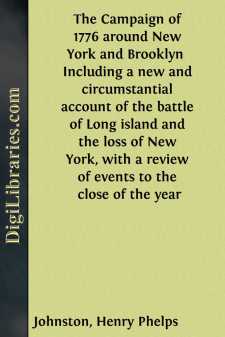 The site now occupied by the two cities of New York and Brooklyn, and over which they continue to spread, is pre-eminently "Revolutionary soil." Very few of our historic places are more closely associated with the actual scenes of that struggle. As at Boston in 1775, so here in 1776, we had the war at our doors and all about us. In what is now the heart of Brooklyn Revolutionary soldiers lay encamped for months, and in the heat of a trying summer surrounded themselves with lines of works. What have since been converted into spots of rare beauty—Greenwood Cemetery and Prospect Park—became, with the ground in their vicinity, a battle-field. New York, which was then taking its place as the most flourishing city on the continent, was transformed by the emergency into a fortified military base. Troops quartered in Broad Street and along the North and East rivers, and on the line of Grand Street permanent camps were established. Forts, redoubts, batteries, and intrenchments encircled the town. The streets were barricaded, the roads blocked, and efforts made to obstruct the navigation of both rivers. Where we have stores and warehouses, Washington fixed alarm and picket posts; and at points where costly residences stand, men fought, died, and were buried. In 1776 the cause had become general; soldiers gathered here from ten of the original thirteen States, and the contest assumed serious proportions. It was here around New York and Brooklyn that the War of the Revolution began in earnest.

The record of what occurred in this vicinity at that interesting period has much of it been preserved in our standard histories by Gordon, Marshall, Irving, Hildreth, Lossing, Bancroft, Carrington, and others. In the present volume it is given as a single connected account, with many additional particulars which have but recently come to light. This new material, gathered largely from the descendants of officers and soldiers who participated in that campaign, is published with other documents in of this work, and is presented as its principal feature. What importance should be attached to it must be left to the judgment of the reader.

The writer himself has made use of these documents in filling gaps and correcting errors. Such documents, for example, as the orders issued by Generals Greene and Sullivan on Long Island, with the original letters of Generals Parsons, Scott, and other officers, go far towards clearing up the hitherto doubtful points in regard to operations on the Brooklyn side. There is not a little, also, that throws light on the retreat to New York; while material of value has been unearthed respecting events which terminated in the capture of the city by the British. Considerable space has been devoted to the preparations made by both sides for the campaign, but as the nature of those preparations illustrates the very great importance attached to the struggle that was to come, it may not appear disproportionate. The narrative also is continued so as to include the closing incidents of the year, without which it would hardly be complete, although they take us beyond the limits of New York....