Supplement to Animal Sanctuaries in Labrador Supplement to an Address Presented by Lt.-Colonel William Wood, F.R.S.C. Before the Second Annual Meeting of the Commission of Conservation in January, 1911 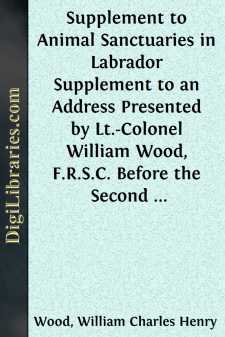 Supplement To An Address ON Animal Sanctuaries in Labrador BY Lieut.-Colonel William Wood, F.R.S.C.

The appeal prefixed to the original Address in 1911 announced the issue of the present supplement in 1912, and asked experts and other leaders of public opinion to set the subject on firm foundations by contributing advice and criticism.

The response was most gratifying. The twelve hundred review copies sent out to the Canadian press, and the hundreds more sent out to general and specialist periodicals in every part of the English-speaking world, all met with a sympathetic welcome, and were often given long and careful notices. Many scientific journals, like the Bulletin of the Zoological Society of America, sporting magazines, like the Canadian Rod and Gun, and zoophil organs, like the English Animals' Guardian, examined the Address thoroughly from their respective standpoints. The Empire Review has already reprinted it verbatim in London, and an association of outing men are now preparing to do the same in New York.

But though the press has been of the greatest service in the matter of publicity the principal additions to a knowledge of the question have come from individuals. Naturalists, sportsmen and leaders in public life have all helped both by advice and encouragement. Quotations from a number of letters are published at the end of this supplement. The most remarkable characteristic of all this private correspondence and public notice, as well as the spoken opinions of many experts, is their perfect agreement on the cardinal point that we are wantonly living like spendthrifts on the capital of our wild life, and that the general argument of the Address is, therefore, incontrovertibly true.

The gist of some of the most valuable advice is, that while the Address is true so far as it goes, its application ought to be extended to completion by including the leasehold system, side by side with the establishment of sanctuaries and the improvement and enforcement of laws.

Such an extension takes me beyond my original limits. Yet, both for the sake of completeness and because this system is a most valuable means toward the end desired by all conservers of wild life, I willingly insert leaseholds as the connecting link between laws and sanctuaries.

But before trying to give a few working suggestions on laws, leaseholds and sanctuaries, and, more particularly still, before giving any quotations from letters, I feel bound to point out again, as I did in the Address itself, that my own personality is really of no special consequence, either in giving the suggestions or receiving the letters. I have freely picked the brains of other men and simply put together the scattered parts of what ought to be a consistent whole.

It is a truism and a counsel of perfection to say so, but, to be effective, wild-life protection laws, like other laws, must be scientific, comprehensive, accepted by the public, understood by all concerned, and impartially enforced.

To be scientifically comprehensive they must define man's whole attitude towards wild life, whether for business, sport or study. One general code would suffice. A preamble could explain that the object was to use the interest, not abuse the capital of wild life. Then the noxious and beneficial kinds could be enumerated, close seasons mentioned, regulations laid down, etc. From this one code it would be easy to pick out for separate publication whatever applied only to one place or one form of human activity. But even this general code would not be enough unless the relations between animal and plant life were carefully adjusted, so that each might benefit the other, whenever possible, and neither might suffer because the other was under a different department. If, in both the Dominion and Provincial governments there are unified departments of agriculture to aid and control man's own domestic harvest, why should there not also be unified departments to aid and control his harvest of the wilds? A Minister of Fauna and Flora sounds startling, and perhaps a little absurd. But fisheries, forests and game have more to do with each other than any one of them with mines. And, whatever his designation, such a minister would have no lack of work, especially in Labrador....