Statistical, Historical and Political Description of the Colony of New South Wales and its Dependent Settlements in Van Diemen's Land With a Particular Enumeration of the Advantages Which These Colonies Offer for Emigration, and Their Superiority in Many Respects Over Those Possessed by the United States of America 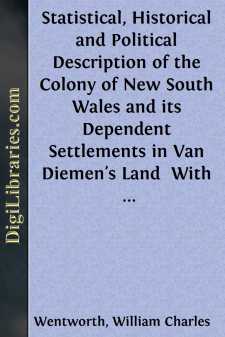 PART I NEW SOUTH WALES. STATISTICAL ACCOUNT OF THE SETTLEMENTS IN NEW HOLLAND.

The colony of New South Wales is situated on the eastern coast of New Holland. This island, which was first discovered by the Dutch in 1616, lies between the 9 degrees and 39 degrees of south latitude, and the 108 degrees and 153 degrees of east longitude; and from its immense size, seems rather to merit the appellation of continent, which many geographers have bestowed on it. Since that period it has been visited and examined by a galaxy of celebrated navigators, among whom Cook and Flinders rank the most conspicuous. Still the survey of this large portion of the world cannot, by any means, be deemed complete; since not one of all the navigators who have laid down the various parts of its coasts, has discovered the mouth of any considerable river; and it is hardly within the scope of possible belief, that a country of such vast extent does not possess at least one river, which may deserve to be ranked in the class of "rivers of the first magnitude."

If a judgment were formed of this island from the general aspect of the country bordering the sea, it would be pronounced one of the most barren spots on the face of the globe. Experience, however, has proved that such an opinion would be exactly the reverse of truth; since, as far as the interior has been explored, its general fertility amply compensates for the extreme sterility of the coast.

The greater part of this country is covered with timber of a gigantic growth, but of an entirely different description from the timber of Europe. It is, however, very durable, and well adapted to all the purposes of human industry.

The only metal yet discovered is iron. It abounds in every part of the country, and is in some places purer than in any other part of the world. Coals are found in many places of the best quality. There is also abundance of slate, limestone and granite, though not in the immediate vicinity of Port Jackson. Sand-stone, quartz, and freestone are found every where.

The rivers and seas teem with excellent fish; but the eel and smelt, the mullet, whiting, mackarel, sole, skate, and John Dory are, I believe, the only sorts known in this country.

The animals are, the kangaroo, native dog, (which is a smaller species of the wolf,) the wombat, bandicoot, kangaroo rat, opossum, flying squirrel, flying fox, etc. etc. There are none of those animals or birds which go by the name of "game" in this country, except the heron. The hare, pheasant and partridge are quite unknown; but there are wild ducks, widgeon, teal, quail, pigeons, plovers, snipes, etc. etc., with emus, black swans, cockatoos, parrots, parroquets, and an infinite variety of smaller birds, which are not found in any other country. In fact, both its animal and vegetable kingdoms are in a great measure peculiar to itself.

There are many poisonous reptiles in this country, but few accidents happen either to the aborigines, or the colonists from their bite. Of these the centipede, tarantula, scorpion, slow-worm, and the snake, are the most to be dreaded; particularly the latter, since there are, I believe, at least thirty varieties of them, of which all but one are venomous in the highest degree....