Sketch of Handel and Beethoven Two Lectures, Delivered in the Lecture Hall of the Wimbledon Village Club, on Monday Evening, Dec. 14, 1863; and Monday Evening, Jan. 11, 1864 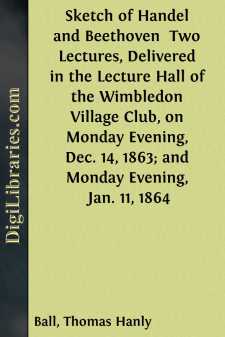 Seneca has well said, "The three main points in the question of benefits, are, first, a judicious choice in the object; secondly, in the matter of our benevolence; and thirdly, in the manner of expressing it."

Of the first, it would not be becoming in me to speak; of the second, you are the rightful judge; of the third, I beg leave thus publicly to state, that not only in requesting permission to publish this lecture at your own expense but on many other occasions, you have fully come up to Seneca's idea of what a benefactor ought to be.

I shall not attempt describing what I hope you give me credit for; Furnius never gained so much upon Augustus as by a speech, upon the getting of his father's pardon for siding with Anthony, "This Grace," says he, "is the only injury that ever Cæsar did me; for it has put me upon a necessity of living and dying ungrateful."

Allow me to dedicate the little volume to you, and believe me, ever to remain,

Your obedient and faithful Servant,

A brief account of "The Wimbledon Village Club" will explain the origin and object of the two following Lectures.

"The design of the Institution is to afford to the inhabitants, and more especially the working and middle classes of Wimbledon and its vicinity, opportunities of intellectual and moral improvement, and rational and social enjoyment, through the medium of a Reading Room and Library, Lectures and Classes."

The Reading Room is supplied with Daily and Weekly Newspapers, Periodicals, and Books.

The Library contains upwards of Six Hundred volumes, all which have been presented to the Institution.

The Lectures are on various literary and scientific subjects.

To these have been recently added, Readings and Chat Meetings.

Readings, are three short readings from some popular author, by different readers, on the same evening.

"Chat Meetings are simplifications of a soirée, or a conversazione. They originated in the idea that many parishioners, having in their homes interesting objects, the examination of which would afford pleasure and instruction to their fellow-parishioners, would on certain occasions gladly take these objects to a room appointed for the purpose, and display and explain them."

Mr. Toynbee, the Fidus Achates of the Club, has, in his admirable "Hints on the Formation of Local Museums," well said—"The Wimbledon Club is admirably calculated to meet the wants of the working classes, as regards their recreation and instruction. While it furnishes amusement and instruction to all classes, it brings them together at its various meetings in friendly intercourse; the management of the Institution, and the organization of its several proceedings, afford a valuable experience to the Committee, who portion among themselves their respective work; and the preparation of the Lectures, &c., proves a healthy mental stimulus to those intelligent inhabitants who desire to take part in one of the most delightful of duties, viz., the conveyance to the minds of others an interest in those pleasing and elevating subjects from which, happily their own minds derive gratification."—"Hints," pp....