Servia, Youngest Member of the European Family or, A Residence in Belgrade and Travels in the Highlands and Woodlands of the Interior, during the years 1843 and 1844. 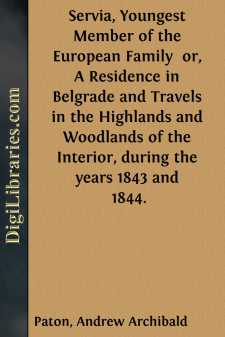 I have been four years in the East, and feel that I have had quite enough of it for the present. Notwithstanding the azure skies, bubbling fountains, Mosaic pavements, and fragrant narghilés, I begin to feel symptoms of ennui, and a thirst for European life, sharp air, and a good appetite, a blazing fire, well-lighted rooms, female society, good music, and the piquant vaudevilles of my ancient friends, Scribe, Bayard, and Melesville.

At length I stand on the pier of Beyrout, while my luggage is being embarked for the Austrian steamer lying in the roads, which, in the Levantine slang, has lighted her chibouque, and is polluting yon white promontory, clear cut in the azure horizon, with a thick black cloud of Wallsend.

I bade a hurried adieu to my friends, and went on board. The quarter-deck, which retained its awning day and night, was divided into two compartments, one of which was reserved for the promenade of the cabin passengers, the other for the bivouac of the Turks, who retained their camp habits with amusing minuteness, making the larboard quarter a vast tent afloat, with its rolled up beds, quilts, counterpanes, washing gear, and all sorts of water-cans, coffee-pots, and chibouques, with stores of bread, cheese, fruit, and other provisions for the voyage. In the East, a family cannot move without its household paraphernalia, but then it requires a slight addition of furniture and utensils to settle for years in a strange place. The settlement of a European family requires a thousand et ceteras and months of installation, but then it is set in motion for the new world with a few portmanteaus and travelling bags.

Two days and a half of steaming brought us to Rhodes.

An enchanter has waved his wand! in reading of the wondrous world of the ancients, one feels a desire to get a peep at Rome before its destruction by barbarian hordes. A leap backwards of half this period is what one seems to make at Rhodes, a perfectly preserved city and fortress of the middle ages. Here has been none of the Vandalism of Vauban, Cohorn, and those mechanical-pated fellows, who, with their Dutch dyke-looking parapets, made such havoc of donjons and picturesque turrets in Europe. Here is every variety of mediæval battlement; so perfect is the illusion, that one wonders the waiter's horn should be mute, and the walls devoid of bowman, knight, and squire.

Two more delightful days of steaming among the Greek Islands now followed. The heat was moderate, the motion gentle, the sea was liquid lapis lazuli, and the hundred-tinted islets around us, wrought their accustomed spell. Surely there is something in climate which creates permanent abodes of art! The Mediterranean, with its hydrographical configuration, excluding from its great peninsulas the extremes of heat and cold, seems destined to nourish the most exquisite sentiment of the Beautiful. Those brilliant or softly graduated tints invite the palette, and the cultivation of the graces of the mind, shining with its æsthetic ray through lineaments thorough-bred from generation to generation, invites the sculptor to transfer to marble, grace of contour and elevation of expression. But let us not envy the balmy South. The Germanic or northern element, if less susceptible of the beautiful is more masculine, better balanced, less in extremes. It was this element that struck down the Roman empire, that peoples America and Australia, and rules India; that exhausted worlds, and then created new....