Searchlights on Health: Light on Dark Corners A Complete Sexual Science and a Guide to Purity and Physical Manhood, Advice To Maiden, Wife, And Mother, Love, Courtship, And Marriage

by B. G. (Benjamin Grant) Jefferis 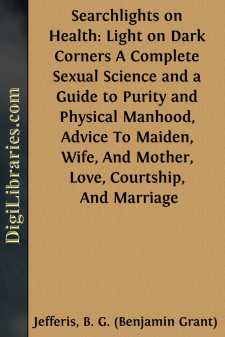 1. The old maxim, that "Knowledge is power," is a true one, but there is still a greater truth: "Knowledge is Safety." Safety amid physical ills that beset mankind, and safety amid the moral pitfalls that surround so many young people, is the great crying demand of the age.

2. Criticism.—While the aim of this work, though novel and to some extent is daring, it is chaste, practical and to the point, and will be a boon and a blessing to thousands who consult its pages. The world is full of ignorance, and the ignorant will always criticise, because they live to suffer ills, for they know no better. New light is fast falling upon the dark corners, and the eyes of many are being opened.

3. Researches of Science.—The researches of science in the past few years have thrown light on many facts relating to the physiology of man and woman, and the diseases to which they are subject, and consequently many reformations have taken place in the treatment and prevention of diseases peculiar to the sexes.

4. Lock and Key.—Any information bearing upon the diseases of mankind should not be kept under lock and key. The physician is frequently called upon to speak in plain language to his patients upon some private and startling disease contracted on account of ignorance. The better plan, however, is to so educate and enlighten old and young upon the important subjects of health, so that the necessity to call a physician may occur less frequently.

5. Progression.—A large, respectable, though diminishing class in every community, maintain that nothing that relates exclusively to either sex should become the subject of popular medical instruction. But such an opinion is radically wrong; ignorance is no more the mother of purity than it is of religion. Enlightenment can never work injustice to him who investigates.

6. An Example.—The men and women who study and practice medicine are not the worse, but the better for such knowledge; so it would be to the community in general if all would be properly instructed on the laws of health which relate to the sexes.

7. Crime and Degradation.—Had every person a sound understanding on the relation of the sexes, one of the most fertile sources of crime and degradation would be removed. Physicians know too well what sad consequences are constantly occurring from a lack of proper knowledge on these important subjects.

8. A Consistent Consideration.—Let the reader of this work study its pages carefully and be able to give safe counsel and advice to others, and remember that purity of purpose and purity of character are the brightest jewels in the crown of immortality.

1. The Beginning.—There is a charm in opening manhood which has commended itself to the imagination in every age. The undefined hopes and promises of the future—the dawning strength of intellect—the vigorous flow of passion—the very exchange of home ties and protected joys for free and manly pleasures, give to this period an interest and excitement unfelt, perhaps, at any other.