Remarks of Mr. Calhoun of South Carolina on the bill to prevent the interference of certain federal officers in elections: delivered in the Senate of the United States February 22, 1839 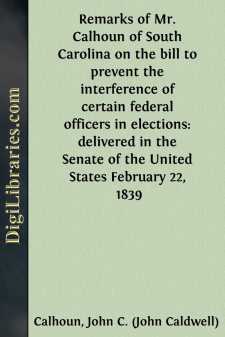 At the last session of Congress, it was avowed on all sides that the public debt, as to all practical purposes, was in fact paid, the small surplus remaining being nearly covered by the money in the Treasury and the bonds for duties which had already accrued; but with the arrival of this event our last hope was doomed to be disappointed. After a long session of many months, and the most earnest effort on the part of South Carolina and the other Southern States to obtain relief, all that could be effected was a small reduction of such a character that, while it diminished the amount of burden, it distributed that burden more unequally than even the obnoxious Act of 1828; reversing the principle adopted by the Bill of 1816, of laying higher duties on the unprotected than the protected articles, by repealing almost entirely the duties laid upon the former, and imposing the burden almost entirely on the latter. It was thus that, instead of relief—instead of an equal distribution of burdens and benefits of the government, on the payment of the debt, as had been fondly anticipated—the duties were so arranged as to be, in fact, bounties on one side and taxation on the other; thus placing the two great sections of the country in direct conflict in reference to its fiscal action, and thereby letting in that flood of political corruption which threatens to sweep away our Constitution and our liberty.

This unequal and unjust arrangement was pronounced, both by the administration, through its proper organ, the Secretary of the Treasury, and by the opposition, to be a *permanent* adjustment; and it was thus that all hope of relief through the action of the general government terminated; and the crisis so long apprehended at length arrived, at which the State was compelled to choose between absolute acquiescence in a ruinous system of oppression, or a resort to her reserved powers—powers of which she alone was the rightful judge, and which only, in this momentous juncture, could save her. She determined on the latter.

The consent of two-thirds of her Legislature was necessary for the call of a convention, which was considered the only legitimate organ through which the people, in their sovereignty, could speak. After an arduous struggle the States-rights party succeeded; more than two-thirds of both branches of the Legislature favorable to a convention were elected; a convention was called—the ordinance adopted. The convention was succeeded by a meeting of the Legislature, when the laws to carry the ordinance into execution were enacted—all of which have been communicated by the President, have been referred to the Committee on the Judiciary, and this bill is the result of their labor.

Having now corrected some of the prominent misrepresentations as to the nature of this controversy, and given a rapid sketch of the movement of the State in reference to it, I will next proceed to notice some objections connected with the ordinance and the proceedings under it....