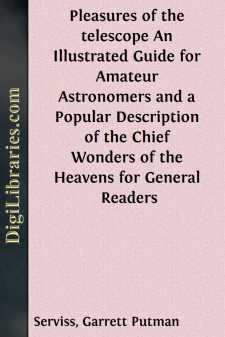 CHAPTER I THE SELECTION AND TESTING OF A GLASS

"O telescope, instrument of much knowledge, more precious than any scepter! Is not he who holds thee in his hand made king and lord of the works of God?"—John Kepler.

If the pure and elevated pleasure to be derived from the possession and use of a good telescope of three, four, five, or six inches aperture were generally known, I am certain that no instrument of science would be more commonly found in the homes of intelligent people. The writer, when a boy, discovered unexpected powers in a pocket telescope not more than fourteen inches long when extended, and magnifying ten or twelve times. It became his dream, which was afterward realized, to possess a more powerful telescope, a real astronomical glass, with which he could see the beauties of the double stars, the craters of the moon, the spots on the sun, the belts and satellites of Jupiter, the rings of Saturn, the extraordinary shapes of the nebulæ, the crowds of stars in the Milky Way, and the great stellar clusters. And now he would do what he can to persuade others, who perhaps are not aware how near at hand it lies, to look for themselves into the wonder-world of the astronomers.

There is only one way in which you can be sure of getting a good telescope. First, decide how large a glass you are to have, then go to a maker of established reputation, fix upon the price you are willing to pay—remembering that good work is never cheap—and finally see that the instrument furnished to you answers the proper tests for a telescope of its size. There are telescopes and telescopes. Occasionally a rare combination of perfect homogeneity in the material, complete harmony between the two kinds of glass of which the objective is composed, and lens surfaces whose curves are absolutely right, produces a telescope whose owner would part with his last dollar sooner than with it. Such treasures of the lens-maker's art can not, perhaps, be commanded at will, yet, they are turned out with increasing frequency, and the best artists are generally able, at all times, to approximate so closely to perfection that any shortcoming may be disregarded.

In what is said above I refer, of course, to the refracting telescope, which is the form of instrument that I should recommend to all amateurs in preference to the reflector. But, before proceeding further, it may be well to recall briefly the principal points of difference between these two kinds of telescopes. The purpose of a telescope of either description is, first, to form an image of the object looked at by concentrating at a focus the rays of light proceeding from that object. The refractor achieves this by means of a carefully shaped lens, called the object glass, or objective. The reflector, on the other hand, forms the image at the focus of a concave mirror.

Image at the Focus of a Lens.

A very pretty little experiment, which illustrates these two methods of forming an optical image, and, by way of corollary, exemplifies the essential difference between refracting and reflecting telescopes, may be performed by any one who possesses a reading glass and a magnifying hand mirror. In a room that is not too brightly illuminated pin a sheet of white paper on the wall opposite to a window that, by preference, should face the north, or away from the position of the sun. Taking first the reading glass, hold it between the window and the wall parallel to the sheet of paper, and a foot or more distant from the latter. By moving it to and fro a little you will be able to find a distance, corresponding to the focal length of the lens, at which a picture of the window is formed on the paper. This picture, or image, will be upside down, because the rays of light cross at the focus. By moving the glass a little closer to the wall you will cause the picture of the window to become indistinct, while a beautiful image of the houses, trees, or other objects of the outdoor world beyond, will be formed upon the paper. We thus learn that the distance of the image from the lens varies with the distance of the object whose image is formed. In precisely a similar manner an image is formed at the focus of the object glass of a refracting telescope.

Image at the Focus of a Concave Mirror.

Take next your magnifying or concave mirror, and detaching the sheet of paper from the wall, hold it nearly in front of the mirror between the latter and the window....