Personal Reminiscences of Early Days in California with Other Sketches; To Which Is Added the Story of His Attempted Assassination by a Former Associate on the Supreme Bench of the State 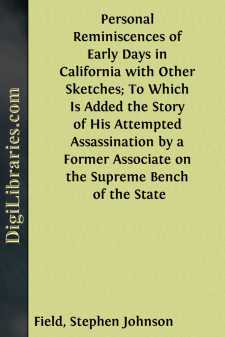 WHY AND HOW I CAME TO CALIFORNIA.

Some months previous to the Mexican War, my brother David Dudley Field, of New York City, wrote two articles for the Democratic Review upon the subject of the Northwestern Boundary between the territory of the United States and the British Possessions. One of these appeared in the June, and the other in the November number of the Review for 1845.[1] While writing these articles he had occasion to examine several works on Oregon and California, and, among others, that of Greenhow, then recently published, and thus became familiar with the geography and political history of the Pacific Coast. The next Spring, and soon after the war broke out, in the course of a conversation upon its probable results, he remarked, that if he were a young man, he would go to San Francisco; that he was satisfied peace would never be concluded without our acquiring the harbor upon which it was situated; that there was no other good harbor on the coast, and that, in his opinion, that town would, at no distant day, become a great city. He also remarked that if I would go he would furnish the means, not only for the journey, but also for the purchase of land at San Francisco and in its vicinity. This conversation was the first germ of my project of coming to California.

Some months afterwards, and while Col. Stevenson's regiment was preparing to start from New York for California, my brother again referred to the same subject and suggested the idea of my going out with the regiment. We had at that time a clerk in the office by the name of Sluyter, for whom I had great regard. With him I talked the matter over, it being my intention, if I should go at all, to induce him if possible to accompany me. But he wished to get married, and I wished to go to Europe. The result of our conference was, that the California project was deferred, with the understanding, however, that after my return from Europe we should give it further consideration. But the idea of going to California thus suggested, made a powerful impression upon my mind. It pleased me. There was a smack of adventure in it. The going to a country comparatively unknown and taking a part in fashioning its institutions, was an attractive subject of contemplation. I had always thought that the most desirable fame a man could acquire was that of being the founder of a State, or of exerting a powerful influence for good upon its destinies; and the more I thought of the new territory about to fall into our hands beyond the Sierra Nevada, the more I was fascinated with the idea of settling there and growing up with it.

But I was anxious first to visit, or rather to revisit, Europe. I was not able, however, to make the necessary arrangements to do so until the Summer of 1848. On the first of May of that year, I dissolved partnership with my brother, and in June started for Europe. In the following December, while at Galignani's News Room in Paris, I read in the New York Herald the message of President Polk, which confirmed previous reports, that gold had been discovered in California, then recently acquired....