Pathfinders of the West Being the Thrilling Story of the Adventures of the Men Who Discovered the Great Northwest: Radisson, La Verendrye, Lewis and Clark 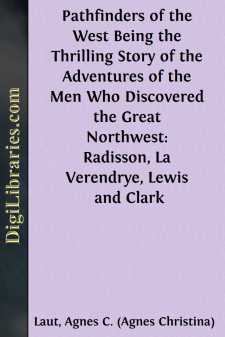 The Boy Radisson is captured by the Iroquois and carried to the Mohawk Valley—In League with Another Captive, he slays their Guards and escapes—He is overtaken in Sight of Home—Tortured and adopted in the Tribe, he visits Orange, where the Dutch offer to ransom him—His Escape

Early one morning in the spring of 1652 three young men left the little stockaded fort of Three Rivers, on the north bank of the St. Lawrence, for a day's hunting in the marshes of Lake St. Peter. On one side were the forested hills, purple with the mists of rising vapor and still streaked with white patches of snow where the dense woods shut out the sunlight. On the other lay the silver expanse of the St. Lawrence, more like a lake than a river, with mile on mile southwestward of rush-grown marshes, where plover and curlew and duck and wild geese flocked to their favorite feeding-grounds three hundred years ago just as they do to-day. Northeastward, the three mouths of the St. Maurice poured their spring flood into the St. Lawrence.

The hunters were very young. Only hunters rash with the courage of untried youth would have left the shelter of the fort walls when all the world knew that the Iroquois had been lying in ambush round the little settlement of Three Rivers day and night for the preceding year. Not a week passed but some settler working on the outskirts of Three Rivers was set upon and left dead in his fields by marauding Iroquois. The tortures suffered by Jogues, the great Jesuit missionary who had been captured by the Iroquois a few years before, were still fresh in the memory of every man, woman, and child in New France. It was from Three Rivers that Piescaret, the famous Algonquin chief who could outrun a deer, had set out against the Iroquois, turning his snowshoes back to front, so that the track seemed to lead north when he was really going south, and then, having thrown his pursuers off the trail, coming back on his own footsteps, slipping up stealthily on the Iroquois that were following the false scent, and tomahawking the laggards.[1] It was from Three Rivers that the Mohawks had captured the Algonquin girl who escaped by slipping off the thongs that bound her. Stepping over the prostrate forms of her sleeping guards, such a fury of revenge possessed her that she seized an axe and brained the nearest sleeper, then eluded her pursuers by first hiding in a hollow tree and afterward diving under the debris of a beaver dam.

These things were known to every inhabitant of Three Rivers. Farmers had flocked into the little fort and could venture back to their fields only when armed with a musket.[2] Yet the three young hunters rashly left the shelter of the fort walls and took the very dangerous path that led between the forests and the water. One of the young men was barely in his seventeenth year.[3] This was Pierre Esprit Radisson, from St. Malo, the town of the famous Cartier....