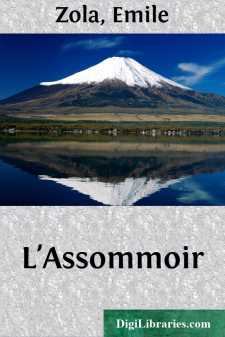 Gervaise had waited and watched for Lantier until two in the morning. Then chilled and shivering, she turned from the window and threw herself across the bed, where she fell into a feverish doze with her cheeks wet with tears. For the last week when they came out of the Veau à Deux Têtes, where they ate, he had sent her off to bed with the children and had not appeared until late into the night and always with a story that he had been looking for work.

This very night, while she was watching for his return, she fancied she saw him enter the ballroom of the Grand-Balcon, whose ten windows blazing with lights illuminated, as with a sheet of fire, the black lines of the outer boulevards. She caught a glimpse of Adèle, a pretty brunette who dined at their restaurant and who was walking a few steps behind him, with her hands swinging as if she had just dropped his arm, rather than pass before the bright light of the globes over the door in his company.

When Gervaise awoke about five o'clock, stiff and sore, she burst into wild sobs, for Lantier had not come in. For the first time he had slept out. She sat on the edge of the bed, half shrouded in the canopy of faded chintz that hung from the arrow fastened to the ceiling by a string. Slowly, with her eyes suffused with tears, she looked around this miserable chambre garnie, whose furniture consisted of a chestnut bureau of which one drawer was absent, three straw chairs and a greasy table on which was a broken-handled pitcher.

Another bedstead—an iron one—had been brought in for the children. This stood in front of the bureau and filled up two thirds of the room.

A trunk belonging to Gervaise and Lantier stood in the corner wide open, showing its empty sides, while at the bottom a man's old hat lay among soiled shirts and hose. Along the walls and on the backs of the chairs hung a ragged shawl, a pair of muddy pantaloons and a dress or two—all too bad for the old-clothes man to buy. In the middle of the mantel between two mismated tin candlesticks was a bundle of pawn tickets from the Mont-de-Piété. These tickets were of a delicate shade of rose.

The room was the best in the hotel—the first floor looking out on the boulevard.

Meanwhile side by side on the same pillow the two children lay calmly sleeping. Claude, who was eight years old, was breathing calmly and regularly with his little hands outside of the coverings, while Etienne, only four, smiled with one arm under his brother's neck.

When their mother's eyes fell on them she had a new paroxysm of sobs and pressed her handkerchief to her mouth to stifle them. Then with bare feet, not stopping to put on her slippers which had fallen off, she ran to the window out of which she leaned as she had done half the night and inspected the sidewalks as far as she could see.

The hotel was on the Boulevard de la Chapelle, at the left of the Barrière Poissonnièrs. It was a two-story building, painted a deep red up to the first floor, and had disjointed weather-stained blinds....