Illustrated Catalogue of a Portion of the Collections Made During the Field Season of 1881 Third Annual Report of the Bureau of Ethnology to the Secretary of the Smithsonian Institution, 1881-82, Government Printing Office, Washington, 1884, pages 427-510 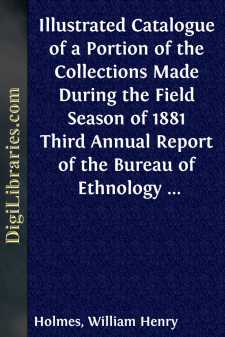 Mr. Palmer began his explorations early in July, 1881, and continued with marked success until the end of the year.

He first paid a visit to the Cherokee Indians of North Carolina, and collected a large number of articles manufactured or used by this people, besides a number of antiquities from the same region.

From Carolina he crossed into Tennessee, and began work by opening a number of mounds in Cocke County. In September he opened a very important mound, which I have named the McMahan Mound. It is located in the vicinity of Sevierville, Sevier County. Afterwards mounds were opened on Fain's Island, at Dandridge, and at Kingston.

In September he crossed into Arkansas and made extensive explorations at Osceola, Pecan Point, Arkansas Post, and Indian Bay.

It has devolved upon the writer to examine and catalogue this fine collection.

In preparing the catalogue the plan of arrangement already adopted by the Bureau has been carried out; that is, a primary classification by locality and a secondary by material.

The descriptions of specimens are taken from the card catalogue prepared by the writer on first opening the collection, and will be given in full, excepting in cases where detailed descriptions have been furnished in separate papers, either in this or the preceding Annual Report. Cuts have been made of a number of the more interesting specimens. The localities are named in the order of their exploration.

62953. A small disk of dark-gray slate, 1¼ inches in diameter and 1½ inches in thickness. The form is symmetrical and the surface well polished. The sides are convex, slightly so near the center and abruptly so near the circumference. The rim or peripheral surface is squared by grinding, the circular form being accurately preserved. This specimen was obtained from an aged Cherokee, who stated that it had formerly been used by his people in playing some sort of game. It seems not improbable that this stone has been used for polishing pottery.

62952. A small subglobular pebble used as a polishing stone for pottery.

62954. A polishing stone similar to the above. This implement was seen in use by the collector.

62947. A hemispherical stone, probably used as a nut-cracker.

62944. A stone implement somewhat resembling a thick, round-pointed pick, 4½ inches in length and 1 inch in diameter. It is perforated exactly as an iron pick would be for the insertion of a handle. The perforation has been produced by boring from opposite sides; at the surface it is five-eighths of an inch in diameter, and midway about three-eighths. The material seems to be an indurated clay or soft slate.

The collector suggests that this specimen was probably used for smoothing bow-strings or straightening arrow-shafts.