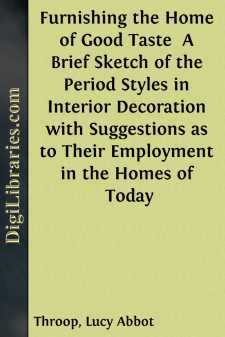 The early history of art in all countries is naturally connected more closely with architecture than with decoration, for architecture had to be developed before the demand for decoration could come. But the two have much in common. Noble architecture calls for noble decoration. Decoration is one of the natural instincts of man, and from the earliest records of his existence we find him striving to give expression to it, we see it in the scratched pieces of bone and stone of the cave dwellers, in the designs of savage tribes, and in Druidical and Celtic remains, and in the great ruins of Yucatan. The meaning of these monuments may be lost to us, but we understand the spirit of trying to express the sense of beauty in the highest way possible, for it is the spirit which is still moving the world, and is the foundation of all worthy achievement.

Egypt and Assyria stand out against the almost impenetrable curtain of pre-historic days in all the majesty of their so-called civilization. Huge, massive, aloof from the world, their temples and tombs and ruins remain. Research has given us the key to their religion, so we understand much of the meaning of their wall-paintings and the buildings themselves. The belief of the Egyptian that life was a short passage and his house a mere stopping-place on the way to the tomb, which was to be his permanent dwelling-place, explains the great care and labor spent on the pyramids, chapels, and rock sepulchers. They embalmed the dead for all eternity and put statues and images in the tombs to keep the mummy company. Colossal figures of their gods and goddesses guarded the tombs and temples, and still remain looking out over the desert with their strange, inscrutable Egyptian eyes. The people had technical skill which has never been surpassed, but the great size of the pyramids and temples and sphinxes gives one the feeling of despotism rather than civilization; of mass and permanency and the wonder of man's achievement rather than beauty, but they personify the mystery and power of ancient Egypt.

The columns of the temples were massive, those of Karnak being seventy feet high, with capitals of lotus flowers and buds strictly conventionalized. The walls were covered with hieroglyphics and paintings. Perspective was never used, and figures were painted side view except for the eye and shoulder. In the tombs have been found many household belongings, beautiful gold and silver work, beside the offerings put there to appease the gods. Chairs have been found, which, humorous as it may sound, are certainly the ancestors of Empire chairs made thousands of years later. This is explained by the influence of Napoleon's Egyptian campaign, but there is something in common between the two times so far apart, of ambition and pride, of grandeur and colossal enterprise.

Greece may well be called the Mother of Beauty, for with the Greeks came the dawn of a higher civilization, a striving for harmony of line and proportion, an ideal clear, high and persistent....