Contemporary American Composers Being a Study of the Music of This Country, Its Present Conditions and Its Future, with Critical Estimates and Biographies of the Principal Living Composers; and an Abundance of Portraits, Fac-simile Musical Autographs, and Compositions 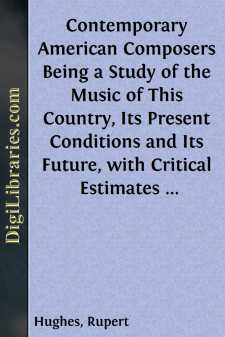 One day there came into Robert Schumann's ken the work of a young fellow named Brahms, and the master cried aloud in the wilderness, "Behold, the new Messiah of music!" Many have refused to accept Brahms at this rating, and I confess to being one of the unregenerate, but the spirit that kept Schumann's heart open to the appeal of any stranger, that led him into instant enthusiasms of which he was neither afraid nor ashamed, enthusiasms in which the whole world has generally followed his leading—that spirit it is that proves his true musicianship, and makes him a place forever among the great critics of music,—a small, small crowd they are, too.

It is inevitable that a pioneer like Schumann should make many mistakes, but he escaped the one great fatal mistake of those who are not open to conviction, nor alert for new beauty and fresh truth, who are willing to take art to their affections or respect only when it has lost its bloom and has been duly appraised and ticketed by other generations or foreign scholars. And yet, even worse than this languorous inanition is the active policy of those who despise everything contemporary or native, and substitute sciolism for catholicity, contempt for analysis.

While the greater part of the world has stayed aloof, the problem of a national American music has been solving itself. Aside from occasional attentions evoked by chance performances, it may be said in general that the growth of our music has been unloved and unheeded by anybody except a few plodding composers, their wives, and a retainer or two. The only thing that inclines me to invade the privacy of the American composer and publish his secrets, is my hearty belief, lo, these many years! that some of the best music in the world is being written here at home, and that it only needs the light to win its meed of praise.

Owing to the scarcity of printed matter relating to native composers, and the utter incompleteness and bias of what exists, I have based this book almost altogether on my own research. I studied the catalogues of all the respectable music publishers, and selected such composers as seemed to have any serious intentions. When I heard of a composer whose work, though earnest, had not been able to find a publisher, I sought him out and read his manuscripts (a hideous task which might be substituted for the comparative pastime of breaking rocks, as punishment for misdemeanors). In every case I secured as many of each composer's works as could be had in print or in manuscript, and endeavored to digest them. Thousands of pieces of music, from short songs to operatic and orchestral scores, I studied with all available conscience. The fact that after going through at least a ton of American compositions, I am still an enthusiast, is surely a proof of some virtue in native music.

A portion of the result of this study was published au courant in a magazine, awakening so much attention that I have at length decided to yield to constant requests and publish the articles in more accessible form. The necessity for revising many of the opinions formed hastily and published immediately, the possibility now of taking the work of our musicians in some perspective, and the opportunity of bringing my information up to date, have meant so much revision, excision, and addition, that this book is really a new work.

The biographical data have been furnished in practically every case by the composers themselves, and are, therefore, reliable in everything except possibly the date of birth. The critical opinions gain their possibly dogmatic tone rather from a desire for brevity than from any hope—or wish—that they should be swallowed whole....