Balder the Beautiful, Volume I. A Study in Magic and Religion: the Golden Bough, Part VII., The Fire-Festivals of Europe and the Doctrine of the External Soul 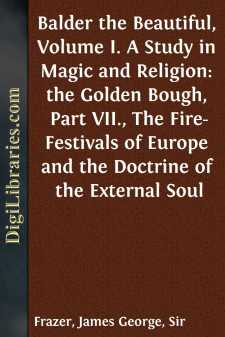 CHAPTER I BETWEEN HEAVEN AND EARTH § 1. Not to touch the Earth

[The priest of Aricia and the Golden Bough]

We have travelled far since we turned our backs on Nemi and set forth in quest of the secret of the Golden Bough. With the present volume we enter on the last stage of our long journey. The reader who has had the patience to follow the enquiry thus far may remember that at the outset two questions were proposed for answer: Why had the priest of Aricia to slay his predecessor? And why, before doing so, had he to pluck the Golden Bough? Of these two questions the first has now been answered. The priest of Aricia, if I am right, was one of those sacred kings or human divinities on whose life the welfare of the community and even the course of nature in general are believed to be intimately dependent. It does not appear that the subjects or worshippers of such a spiritual potentate form to themselves any very clear notion of the exact relationship in which they stand to him; probably their ideas on the point are vague and fluctuating, and we should err if we attempted to define the relationship with logical precision. All that the people know, or rather imagine, is that somehow they themselves, their cattle, and their crops are mysteriously bound up with their divine king, so that according as he is well or ill the community is healthy or sickly, the flocks and herds thrive or languish with disease, and the fields yield an abundant or a scanty harvest. The worst evil which they can conceive of is the natural death of their ruler, whether he succumb to sickness or old age, for in the opinion of his followers such a death would entail the most disastrous consequences on themselves and their possessions; fatal epidemics would sweep away man and beast, the earth would refuse her increase, nay the very frame of nature itself might be dissolved. To guard against these catastrophes it is necessary to put the king to death while he is still in the full bloom of his divine manhood, in order that his sacred life, transmitted in unabated force to his successor, may renew its youth, and thus by successive transmissions through a perpetual line of vigorous incarnations may remain eternally fresh and young, a pledge and security that men and animals shall in like manner renew their youth by a perpetual succession of generations, and that seedtime and harvest, and summer and winter, and rain and sunshine shall never fail. That, if my conjecture is right, was why the priest of Aricia, the King of the Wood at Nemi, had regularly to perish by the sword of his successor.

[What was the Golden Bough?]

But we have still to ask, What was the Golden Bough? and why had each candidate for the Arician priesthood to pluck it before he could slay the priest? These questions I will now try to answer.

[Sacred kings and priests forbidden to touch the ground with their feet.]

It will be well to begin by noticing two of those rules or taboos by which, as we have seen, the life of divine kings or priests is regulated....