Arts and Crafts in the Middle Ages A Description of Mediaeval Workmanship in Several of the Departments of Applied Art, Together with Some Account of Special Artisans in the Early Renaissance 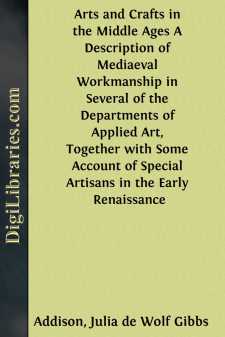 The very general and keen interest in the revival of arts and crafts in America is a sign full of promise and pleasure to those who are working among the so-called minor arts. One reads at every turn how greatly Ruskin and Morris have influenced handicraft: how much these men and their co-workers have modified the appearance of our streets and houses, our materials, textiles, utensils, and all other useful things in which it is possible to shock or to please the æsthetic taste, without otherwise affecting the value of these articles for their destined purposes.

In this connection it is interesting to look into the past, particularly to those centuries known as the Middle Ages, in which the handicrafts flourished in special perfection, and to see for ourselves how these crafts were pursued, and exactly what these arts really were. Many people talk learnedly of the delightful revival of the arts and crafts without having a very definite idea of the original processes which are being restored to popular favour. William Morris himself, although a great modern spirit, and reformer, felt the Page vi necessity of a basis of historic knowledge in all workers. "I do not think," he says, "that any man but one of the highest genius could do anything in these days without much study of ancient art, and even he would be much hindered if he lacked it." It is but turning to the original sources, then, to examine the progress of mediæval artistic crafts, and those sources are usually to be found preserved for our edification in enormous volumes of plates, inaccessible to most readers, and seldom with the kind of information which the average person would enjoy. There are very few books dealing with the arts and crafts of the olden time, which are adapted to inform those who have no intention of practising such arts, and yet who wish to understand and appreciate the examples which they see in numerous museums or exhibitions, and in travelling abroad. There are many of the arts and crafts which come under the daily observation of the tourist, which make no impression upon him and have no message for him, simply because he has never considered the subject of their origin and construction. After one has once studied the subject of historic carving, metal work, embroidery, tapestry, or illumination, one can never fail to look upon these things with intelligent interest and vastly increased pleasure.

Until the middle of the nineteenth century art had been regarded as a luxury for the rich dilettante,—the people heard little of it, and thought less. The utensils and furniture of the middle class were fashioned Page vii only with a view to utility; there was a popular belief that beautiful things were expensive, and the thrifty housekeeper who had no money to put into bric-à-brac never thought of such things as an artistic lamp shade or a well-coloured sofa cushion. Decorative art is well defined by Mr. Russell Sturgis: "Fine art applied to the making beautiful or interesting that which is made for utilitarian purposes."

Many people have an impression that the more ornate an article is, the more work has been lavished upon it. There never was a more erroneous idea. The diligent polish in order to secure nice plain surfaces, or the neat fitting of parts together, is infinitely more difficult than adding a florid casting to conceal clumsy workmanship. Of course certain forms of elaboration involve great pains and labour; but the mere fact that a piece of work is decorated does not show that it has cost any more in time and execution than if it were plain,—frequently many hours have been saved by the device of covering up defects with cheap ornament....