Are You a Bromide? The Sulphitic Theory Expounded and Exemplified According to the Most Recent Researches into the Psychology of Boredom Including Many Well-Known Bromidioms Now in Use 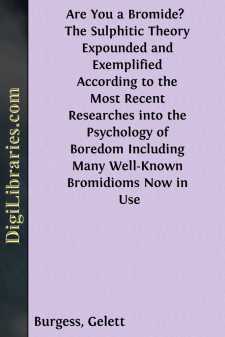 ARE YOU A BROMIDE?

The terms "Bromide" and "Sulphite" as applied to psychological rather than chemical analysis have already become, among the illuminati, so widely adopted that these denominations now stand in considerable danger of being weakened in significance through a too careless use. The adjective "bromidic" is at present adopted as a general vehicle, a common carrier for the thoughtless damnation of the Philistine. The time has come to formulate, authoritatively, the precise scope of intellect which such distinctions suggest and to define the shorthand of conversation which their use has made practicable. The rapid spread of the theory, traveling from Sulphite to Sulphite, like the spark of a pyrotechnic set-piece, till the thinking world has been over-violently illuminated, has obscured its genesis and diverted attention from the simplicity and force of its fundamental principles.[1] In this, its progress has been like that of slang, which, gaining in popularity, must inevitably decrease in aptness and definiteness.

[Footnote 1: It was in April that I first heard of the Theory from the Chatelaine. The following August, in Venice, a lady said to me: "Aren't these old palaces a great deal more sulphitic in their decay than they were originally, during the Renaissance?"]

In attempting to solve the problem which for so long was the despair of philosophers I have made modest use of the word "theory." But to the Sulphite, this simple, convincing, comprehensive explanation is more; it is an opinion, even a belief, if not a credo. It is the crux by which society is tested. But as I shall proceed scientifically, my conclusion will, I trust, effect rational proof of what was an a priori hypothesis.

The history of the origin of the theory is brief. The Chatelaine of a certain sugar plantation in Louisiana, in preparing a list of guests for her house-party, discovered, in one of those explosive moments of inspiration, that all people were easily divided into two fundamental groups or families, the Sulphites and the Bromides. The revelation was apodictic, convincing; it made life a different thing; it made society almost plausible. So, too, it simplified human relationship and gave the first hint of a method by which to adjust and equalize affinities. The primary theorems sprang quickly into her mind, and, such is their power, they have attained almost the nature of axioms. The discovery, indeed, was greater, more far-reaching than she knew, for, having undergone the test of philosophical analysis as well as of practical application, it stands, now, a vital, convincing interpretation of the mysteries of human nature.

We have all tried our hands at categories. Philosophy is, itself, but a system of definitions. What, then, made the Chatelaine's theory remarkable, when Civilization has wearied itself with distinctions? The attempt to classify one's acquaintance is the common sport of the thinker, from the fastidious who says: "There are two kinds of persons—those who like olives and those who don't," to the fatuous, immemorial lover who says: "There are two kinds of women—Daisy, and the Other Kind!"

Previous attempts, less fantastic, have had this fault in common: their categories were susceptible of gradation—extremes fused one into the other....