Address by Honorable Franklin K. Lane, Secretary of the Interior at Conference of Regional Chairmen of the Highway Transport Committee Council of National Defense 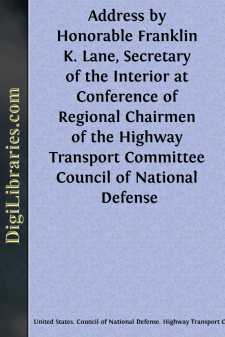 I did not come to-day with the idea of bringing you anything new. On the contrary, I have come here to get the inspiration which association with those from the outside gives. There is no hope for this place unless we can keep in contact with the remainder of the United States. In isolation we think in a vacuum, and it is only when we know what you are thinking of on the outside that we get the impulse which leads to construction. I think I can say out of my knowledge of 12 years of administrative work in this city, that we have to look abroad, go up on the tops of the hills and see the great valleys of our country, before we know really what our policies should be. When we live alone or live in isolation and try to deal with things abstractly or theoretically we make mistakes.

The problem that you deal with is one that I have never had any contact with, but I know this from my knowledge of history; that you can judge the civilization of a nation, of a people, of a continent, or of any part of a nation, by the character of its highways. If you will think over that proposition you will realize that what I have said is true, that those parts of this Nation are most backward, where people live most alone, where they develop those diseases of the mind which come from living alone, where they develop supreme discontent with what is done at Washington or what is done in their own State legislatures, where they are unhappy and discontented, and movements that make against the welfare of our country arise, are those parts where there are poor highways and consequently a lack of communication between the people.

Our eyes are all turned at this time to the other side of the water. I suppose that there has never been a month in the history of the United States when so many people were so anxious to see the morning paper or the evening paper as during the past month. There never has been a time when we have been so thrilled to the very core of our beings. Achievements that those boys over there have made are things that will live in our memories.

And why has it been possible for France to carry on for four years a successful war against the greatest military power that the world has ever seen? Because France had the benefit of the engineering skill and of the foresight of two men who are 1,800 years apart—Napoleon and Caesar. Those men built the roads of France. Without those roads, conceived and built originally by Caesar for the conquest of the Gauls and for the conquest of the Teutons, without the roads built by Napoleon to stand off the enemies of France and to make aggressions to the eastward, Paris would have fallen at least two years ago. So that you gentlemen who are engaged in the business of developing the highways of the country and putting them to greater use may properly conceive of yourselves as engaged in a very farsighted, important bit of statemanship, work that does not have its only concern as to the farmer of this country or the helping of freight movement during this winter alone, but may have consequences that will extend throughout the centuries. Take the instance of Verdun. Verdun would have fallen unquestionably if it had not been for the roads that Napoleon constructed and that France has maintained; for all the credit is not to go to the man who conceived and the man who constructed. This is one thing where we have been short always. One thing that the people of the United States do not realize. It is not sufficient to pay $25,000 a mile for a concrete foundation, but you must put aside 10 cents out of every dollar for the maintenance of these roads or your money has gone to waste and your conception is idle. And you gentlemen know, if you continue, as I hope you will, after the war, you will have not merely a function in the securing of the building of good roads, but will have a very great function in the maintaining of these roads as actual arteries in the system of transportation of the country....