A Study of Pueblo Pottery as Illustrative of Zuni Culture Growth. Fourth Annual Report of the Bureau of Ethnology to the Secretary of the Smithsonian Institution, 1882-83, Government Printing Office, Washington, 1886, pages 467-522 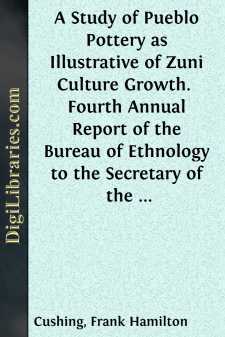 It is conceded that the peculiarities of a culture-status are due chiefly to the necessities encountered during its development. In this sense the Pueblo phase of life was, like the Egyptian, the product of a desert environment. Given that a tribe or stock of people is weak, they will be encroached upon by neighboring stronger tribes, and driven to new surroundings if not subdued. Such we may believe was the influence which led the ancestors of the Pueblo tribes to adopt an almost waterless area for their habitat.

It is apparent at least that they entered the country wherein their remains occur while comparatively a rude people, and worked out there almost wholly their incipient civilization. Of this there is important linguistic evidence.

A Navajo hogan, or hut, is a beehive-shaped or conical structure (see Fig. ) of sticks and turf or earth, sometimes even of stones chinked with mud. Yet its modern Zuñi name is hám' pon ne, from ha we, dried brush, sprigs or leaves; and pó an ne, covering, shelter or roof (po a to place over and ne the nominal suffix); which, interpreted, signifies a "brush or leaf shelter." This leads to the inference that the temporary shelter with which the Zuñis were acquainted when they formulated the name here given, presumably in their earliest condition, was in shape like the Navajo hogan, but in material, of brush or like perishable substance.

The archaic name for a building or walled inclosure is hé sho ta, a contraction of the now obsolete term, hé sho ta pon ne, from hé sho, gum, or resin-like; shó tai e, leaned or placed together convergingly; and tá po an ne, a roof of wood or a roof supported by wood.

Fig. 491.—Perspective view of earliest or Round-house structure of lava.

The meaning of all this would be obscure did not the oldest remains of the Pueblos occur in the almost inaccessible lava wastes bordering the southwestern deserts and intersecting them and were not the houses of these ruins built on the plan of shelters, round (see Figs. , , 493), rather than rectangular. Furthermore, not only does the lava-rock of which their walls have been rudely constructed resemble natural asphaltum (hé sho) and possess a cleavage exactly like that of piñon-gum and allied substances (also hé sho), but some forms of lava are actually known as á he sho or gum-rock. From these considerations inferring that the name hé sho ta pon ne derivatively signifies something like "a gum-rock shelter with roof supports of wood," we may also infer that the Pueblos on their coming into the desert regions dispossessed earlier inhabitants or that they chose the lava-wastes the better to secure themselves from invasion; moreover that the oldest form of building known to them was therefore an inclosure of lava-stones, whence the application of the contraction hé sho ta, and its restriction to mean a walled inclosure.

It may be well in this connection to cite a theory entertained by Mr. Victor Mindeleff, of the Bureau of Ethnology, whose wide experience among the southwestern ruins entitles his judgment to high consideration. In his opinion the rectangular form of architecture, which succeeds the type under discussion, must have been evolved from the circular form by the bringing together, within a limited area, of many houses. This would result in causing the wall of one circular structure to encroach upon that of another, suggesting the partition instead of the double wall. This partition would naturally be built straight as a twofold measure of economy. Supposing three such houses to be contiguous to a central one, each separated from the latter by a straight wall, it may be seen that (as in the accompanying plan) the three sides of a square are already formed, suggesting the parallelogramic as a convenient style of sequent architecture.