A Report of the Debates and Proceedings in the Secret Sessions of the Conference Convention For Proposing Amendments to the Constitution of the United States, Held at Washington, D.C., in February, A.D. 1861 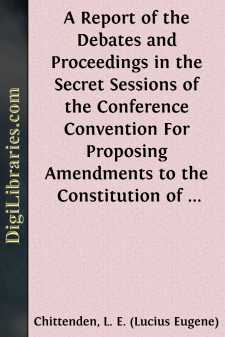 If I had been guided by my judgment alone it is not probable that these notes of the debates in the Conference, held upon the invitation of Virginia, at Washington, in the month of February, 1861, would have been made public. From the commencement of its sessions, a portion of the members were in favor of the daily publication of the proceedings. I was disposed to go farther and have the sessions open to the public; but this proposition was opposed by a large majority. Strong reasons were urged for excluding the multitude which in the excitement of the time would have thronged the hall wherein the Conference held its sessions. But these reasons did not apply to the publication of the debates, and a considerable minority were strongly of opinion that the people should be informed daily, of the votes and remarks of their representatives in that body.

I commenced taking notes on the first day of the session. For the first few days, and until the reports were presented from the general committee, there was but little discussion, and that related to questions incidental to the general subject. On the 15th of February, and before the committee reported, Mr. Orth offered a resolution authorizing the admission of reporters, which, after some discussion, by a close vote was laid upon the table. On the 18th, finding the labor of taking notes greater than I had anticipated, and desiring that a complete record should be preserved; I introduced a resolution providing for the appointment of an official stenographer, who should report the proceedings and hold them subject to the order of the Conference. I urged the adoption of this resolution as strenuously as was proper, but the feeling of the majority appeared to be still adverse to its passage, and it shared the fate of its predecessor. I then revised the notes already taken, and finding them more complete than I had anticipated, determined to make as accurate a report as I was able of the general discussion. I could not then anticipate whether such a report would be useful to the country or not; but I thought if the Conference should propose amendments to the Constitution, and these should be ultimately submitted to the States for adoption, a knowledge of the motives and reasons which influenced the action of the Conference as well as the construction which the members gave to the propositions themselves, might become of as great importance as the same subjects were in the convention which framed the present Constitution. I attended every session of the Conference, and, so far as my strength would permit, made as full and accurate notes as I could, both of the action of the Conference and the observations of its members.

These notes were carefully examined and revised immediately after the close of each daily session. After the passage of the resolution introduced by Mr. Barringer, removing the injunction of secrecy and authorizing their publication, I determined to write them out for the press. I was engaged in this work when the rebellion commenced, and was shortly after called to the performance of the duties of an official position, which for many months left me no leisure for other employments....