A Record of Buddhistic kingdoms: being an account by the Chinese monk Fa-hsien of travels in India and Ceylon (A.D. 399-414) in search of the Buddhist books of discipline 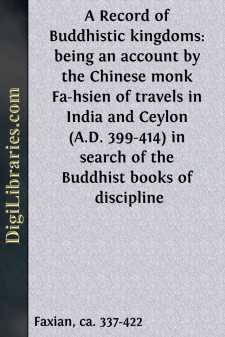 Several times during my long residence in Hong Kong I endeavoured to read through the "Narrative of Fa-Hsien;" but though interested with the graphic details of much of the work, its columns bristled so constantly—now with his phonetic representations of Sanskrit words, and now with his substitution for them of their meanings in Chinese characters, and I was, moreover, so much occupied with my own special labours on the Confucian Classics, that my success was far from satisfactory. When Dr. Eitel's "Handbook for the Student of Chinese Buddhism" appeared in 1870, the difficulty occasioned by the Sanskrit words and names was removed, but the other difficulty remained; and I was not able to look into the book again for several years. Nor had I much inducement to do so in the two copies of it which I had been able to procure, on poor paper, and printed from blocks badly cut at first, and so worn with use as to yield books the reverse of attractive in their appearance to the student.

In the meantime I kept studying the subject of Buddhism from various sources; and in 1878 began to lecture, here in Oxford, on the Travels with my Davis Chinese scholar, who was at the same time Boden Sanskrit scholar. As we went on, I wrote out a translation in English for my own satisfaction of nearly half the narrative. In the beginning of last year I made Fa-Hsien again the subject of lecture, wrote out a second translation, independent of the former, and pushed on till I had completed the whole.

The want of a good and clear text had been supplied by my friend, Mr. Bunyiu Nanjio, who sent to me from Japan a copy, the text of which is appended to the translation and notes, and of the nature of which some account is given in the Introduction, and towards the end of this Preface.

The present work consists of three parts: the Translation of Fa-Hsien's Narrative of his Travels; copious Notes; and the Chinese Text of my copy from Japan.

It is for the Translation that I hold myself more especially responsible. Portions of it were written out three times, and the whole of it twice. While preparing my own version I made frequent reference to previous translations:—those of M. Abel Remusat, "Revu, complete, et augmente d'eclaircissements nouveaux par MM. Klaproth et Landress" (Paris, 1836); of the Rev. Samuel Beal (London, 1869), and his revision of it, prefixed to his "Buddhist Records of the Western World" (Trubner's Oriental Series, 1884); and of Mr. Herbert A. Giles, of H.M.'s Consular Service in China (1877). To these I have to add a series of articles on "Fa-hsien and his English Translators," by Mr. T. Watters, British Consul at I-Chang (China Review, 1879, 1880). Those articles are of the highest value, displaying accuracy of Chinese scholarship and an extensive knowledge of Buddhism. I have regretted that Mr. Watters, while reviewing others, did not himself write out and publish a version of the whole of Fa-Hsien's narrative. If he had done so, I should probably have thought that, on the whole, nothing more remained to be done for the distinguished Chinese pilgrim in the way of translation....