A Plea for the Criminal Being a reply to Dr. Chapple's work: 'The Fertility of the Unfit', and an Attempt to explain the leading principles of Criminological and Reformatory Science 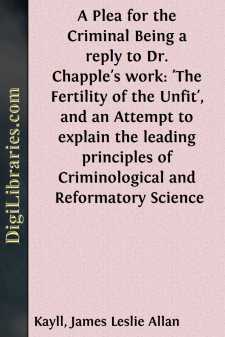 This little book presents an appeal to society to consider its criminals with greater charity and with more intelligent compassion. No other plea is advanced than that the public mind should rid itself of all prejudices and misunderstandings, and should make an honest endeavour to understand what the criminal is, why he is a criminal and what, notwithstanding, are his chances in social life.

The criminal has a claim to be understood just as well as any other creature. It is not necessary that his sympathisers should shut their eyes to the fact that he is capable of shocking crime, that he is often an ungrateful wretch that will bite the hand that feeds him and that among his ranks are to be found the most depraved specimens of humanity that the mind can conceive. A failure to recognize these facts is actually a failure to do justice to his cause. Notwithstanding the hideous history that he may have to unfold, he does ask to be understood.

The majority of people take a most prejudiced view of the criminal's case. They will read the account of some fearful outrage or the details of a disgraceful divorce suit with absolutely no interest what ever in the persons concerned but only for the sake of the morbid satisfaction which such reading gives them. A glance at the sentence will draw forth from them the exclamation that the wretch got no more than he deserved or that he didn't get half enough. This simply indicates that society as a whole has made very little real progress in the manner in which it regards its criminals. The old barbaric idea of revenge is still the dominant one and any scheme for the betterment of the criminal, even if it should give unmistakeable signs that it will accomplish his absolute reform, is carefully investigated to see whether it provides for a sufficient degree of penal suffering. Suffering which is of an entirely penal nature, has very little deterrent value and absolutely no reformative value whatever. And yet our refined and educated men and women will read the accounts of crimes and, in their own minds, sentence the actors to five, ten, fourteen or twenty years; even death, as if criminals were so used to this sort of thing that they thought no more of it than their self-chosen judges would if deprived of a day's sport or disappointed over a ball.

"But," as an ex-member of the Justice Department said to me, "do you know what the wretch has done?" Yes, I do know what he has done, and I know him personally and well, and I know of what he is capable and such knowledge brings with it the conviction that society commits a greater crime than that which he has committed when it undertakes to punish him for his offence upon a principle of pure vengeance.

"Vengeance is mine," saith the Almighty, "I will repay." Society is not God any more than is the individual, so that by acting in the collective capacity no additional plea of justification may be advanced.

The endeavour of this book will be to show that the best interests of society are not served by the infliction of punishments which are essentially penal but by the accomplishment of the reform of the criminal....