A New Illustrated Edition of J. S. Rarey's Art of Taming Horses With the Substance of the Lectures at the Round House, and Additional Chapters on Horsemanship and Hunting, for the Young and Timid 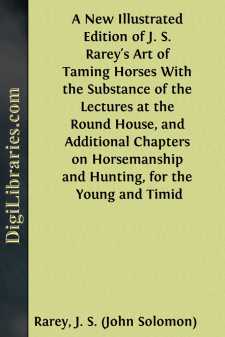 Mr. Rarey is a farmer from Ohio, in the United States. Five years ago he wrote the little book which forms the text of the following complete account of his system, with pictorial illustrations, which are essential for explaining the means he now employs for subduing the most refractory animals. Without these explanations, it would be extremely difficult for any one who had not enjoyed the advantage of hearing Mr. Rarey’s explanations, to practise his system successfully, or even safely. The original work contains a mere outline of the art, since perfected by five years’ further study and practice. The author did not revise his first sketch, for very obvious reasons.

He was living in obscurity, teaching his system for a few dollars in Ohio and Texas. He never taught in the great cities or seabord states of the United States. When he had imparted his art to a pupil, he bound him to secrecy, and presented him with a copy of his pamphlet. He did not dream, then, of becoming the great Lion of the London Season, and realising from English subscribers nearly 20,000l. It will be observed, that in the original American edition, the operation of tying up the foot is described in one chapter, and, at an interval of some pages, that of laying a horse down, in another; and that neither the difficulties nor the necessary precautions, nor the extraordinary results, are described with the clearness their importance requires.

Mr. Rarey has now very properly released his subscribers from the contract which bound them to secrecy; and it is now in every point of view important that this valuable system of rendering horses docile and affectionate, fit for hacks or chargers, ladies’ pads or harness, or the safe conveyance of the aged, crippled, and sick, should be placed within the reach of the thousands whose business it is to deal with horses, as well as of that large class of gentlemen who are obliged to observe economy while keeping up their equestrian tastes. After all, it is to the horse-breeding farmers and grooms to whom Mr. Rarey’s art will be of the most practical use.

As it is, enough of the system has oozed out to suggest to the ignorant new means of cruelty. A horse’s leg is strapped up, and then the unlearned proceed to bully the crippled animal, instead of—to borrow an expressive Americanism—“to gentle him.”

Before entering into the details for practising the Rarey system, it may be interesting to give a sketch of the “facts” that have placed Mr. Rarey in his present well-deserved position, as an invincible Horse-Tamer, as well as a Reformer of the whole modern system of training horses—a position unanimously assigned to him by all the first horsemen of the day.

Mr. Rarey has been a horse-breaker in the United States from his earliest youth, and had frequently to break in horses five or six years old, that had run wild until that mature undocile age.

At first he employed the old English rough-rider method, and in the course of his adventures broke almost every bone in his body, for his pluck was greater than his science. But he was not satisfied with following old routine; he inquired from the wandering horsemen and circus trainers into their methods (it may be that he was at one time attached to a circus himself), and read every book he could lay his hands on. By inquiry and by study—as he says in one of his advertisements—“he thought out” the plan and the principles of his present system.

The methods he uses for placing a colt or horse completely in his power are not absolutely new, although it is possible that he has re-invented and has certainly much improved them. The Russian (i. e. Courland) Circus Riders have long known how, single-handed, to make a horse lie down by fastening up one fore-leg, and then with a rope suddenly pulling the other leg from under him....