A New Doglike Carnivore, Genus Cynarctus, From the Clarendonian, Pliocene, of Texas 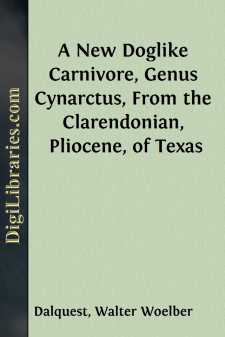 Add to My Favorites
Published: 11 years ago
Downloads: 16
Rating: (0 Votes)

Referred material.—Fragment of right lower mandible bearing m2, No. 11354 KU (see fig. 2), found about two feet horizontally distant from the holotype in the same stratum as the holotype and on the same date by the same collector (a staff member of the Department of Biology of Midwestern University, Wichita Falls, Texas).

Comparisons.—From Cynarctus crucidens Barbour and Cook (see page 225 of Two New Fossil Dogs of the Genus Cynarctus from Nebraska. Nebraska Geol. Surv., 4(pt. 15):223-227, 1914; also pages 330 and 338 of Dental Morphologie of the Procyonidae with a Description of Cynarctoides, Gen. Nov. Geol. Ser. Field Mus. Nat. Hist., 6:323-339, 10 figs., October 31, 1938) C. fortidens differs in lacking, instead of having, an accessory cusp between the protocone and paracone of the fourth upper premolar and in lacking, instead of having, a cingulum on the part of P4 that is internal (lingual) to the protocone.

Reasons for regarding Cynarctus as belonging to the family Canidae instead of to the family Procyonidae have been stated recently in detail by E. C. Galbreath (Remarks on Cynarctoides acridens from the Miocene of Colorado. Trans. Kansas Acad. Sci., 59(3):373-378, 1 fig., October 31, 1956) and need not be repeated here. Although some uncertainty remains as to the familial position of Cynarctus, we favor Galbreath's view that the genus belongs in the family Canidae.

On the basis of the correlation chart (Pl....