A Guide to Peterborough Cathedral Comprising a brief history of the monastery from its foundation to the present time, with a descriptive account of its architectural peculiarities and recent improvements; compiled from the works of Gunton, Britton, and original & authentic documents 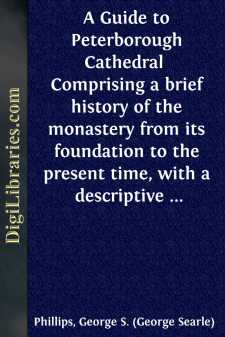 From the foundation of the monastery by Peada, a.d. 655, to its destruction by fire in the reign of Henry the First;—embracing a period of 461 years.

The history of our monastic establishments is but little regarded and as little known. The obscurity in which all monastic institutions is involved renders it difficult to give any certain and positive information respecting the origin of the building to whose history these pages are devoted; but it appears to have been founded at a very early period—the churches of Canterbury, Rochester, London, Westminster, York, and Winchester, being the only large sacred edifices that preceded it. The date of the first building is stated to have been a.d. 655—fifty-eight years after the introduction of Christianity into England by St. Augustine; and so large were the foundation stones, that it required eight yoke of oxen to draw them. From this it may be inferred that the structure was not, like many of the Anglo-Saxon churches of this period—built entirely of wood; though it was probably far inferior in size and style of architecture to the building which succeeded it.

It was one of the kings of Mercia who laid the foundation of the monastery of Medeshamstede in 655; his name was Peada, the eldest son of Penda, the fourth monarch of that kingdom. The facts are thus related by the Saxon chronicler:—"From the beginning of the world had now elapsed 5,850 winters, when Peada the son of Penda assumed the government of the Mercians. In his time came together himself and Osway, brother of King Oswald, and said they would rear a minster to the glory of Christ and honour of Saint Peter; and they did so, and gave it the name of Medeshamstede, because there is a well there called Medeswell. And they began the ground-wall and wrought thereon, after which they committed the work to a monk, whose name was Saxulf. Peada reigned no while, for he was betrayed by his own queen in Eastertide, 658."

Wolfere was the youngest son of Penda, and when Peada died, King Osway assumed the government of Mercia, and ruled very despotically for about three years, when the nobles, incensed at his conduct, rebelled against him, drove him from the kingdom, and chose Wolfere for their king. It was in his reign that "Medeshamstede waxed rich," for Wolfere not only caused the monastery to be built, but he endowed it with a great number of lands, and made it "not subject except to Rome alone;" and the abbey, which was by this time completed, was dedicated with great pomp and ceremony to "Christ and St. Peter," and hallowed in the name of "Saint Peter and Saint Andrew."

Saxulf, who had superintended the building of the abbey, was the first abbot whose name is mentioned in the monkish chronicles as its ruler. He was remarkable for his learning, piety, and humility, and was chiefly instrumental in bringing Christianity into the kingdom of Mercia. Both Saxulf and Cuthbaldus who succeeded him were abbots of the monastery during the rule of Wolfere, although there is little mention made of either in the records which have been handed down to us.

Wolfere died in 683, and was succeeded by his brother Ethelred, who contributed very largely to the monastery, and secured to it by his interest extraordinary privileges....