A General History and Collection of Voyages and Travels - Volume 12 Arranged in Systematic Order: Forming a Complete History of the Origin and Progress of Navigation, Discovery, and Commerce, by Sea and Land, from the Earliest Ages to the Present Time 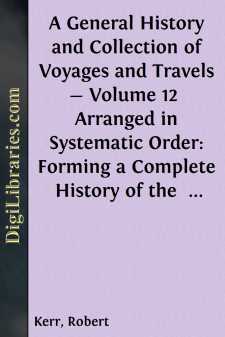 AN ACCOUNT OF THE VOYAGES UNDERTAKEN BY THE ORDER OF HIS MAJESTY GEORGE III. FOR MAKING DISCOVERIES IN THE SOUTHERN HEMISPHERE; AND SUCCESSIVELY PERFORMED BY COMMODORE BYRON, CAPTAIN WALLIS, CAPTAIN CARTERET, AND CAPTAIN COOK, IN THE DOLPHIN, THE SWALLOW, AND THE ENDEAVOUR: DRAWN UP FROM THE JOURNALS WHICH WERE KEPT BY THE SEVERAL COMMANDERS, AND FROM THE PAPERS OF SIR JOSEPH BANKS, BART. BY JOHN HAWKESWORTH, LL.D. [TAKEN FROM THE THIRD EDITION, LONDON 1785, VARIOUSLY MODIFIED TO ANSWER THE PURPOSES OF THIS COLLECTION, AS ELSEWHERE EXPLAINED.]

His majesty, soon after his accession to the crown, formed a design of sending out vessels for making discoveries of countries hitherto unknown; and, in the year 1764, the kingdom being then in a state of profound peace, he proceeded to put it into execution.[1] The Dolphin and the Tamar were dispatched under the command of Commodore Byron.

[Illustration: Tracks of ANSON, BYRON, WALLIS & CHARTERET; with COOK'S in 1769.]

[Footnote 1: In the reign of George II, two voyages of discovery were performed, viz, by Captain Middleton in 1741, and Captains Smith and Moore in 1746. They were in search of a north-west passage through Hudson's Bay. Of these notice will be taken elsewhere.--E.]

The Dolphin was a man-of-war of the sixth rate, mounting twenty-four guns; her complement was 150 men, with three lieutenants, and thirty-seven petty officers.

The Tamar was a sloop, mounting sixteen guns; her complement was ninety men, with three lieutenants, and two-and-twenty petty officers, and the command of her was given to Captain Mouat.

Commodore Byron returned in the month of May in the year 1766, and in the month of August following the Dolphin was again sent out, under the command of Captain Wallis, with the Swallow, commanded by Captain Carteret. The equipment of the Dolphin was the same as before. The Swallow was a sloop mounting fourteen guns; her complement was ninety men, with one lieutenant and twenty-two petty officers.

These vessels proceeded together till they came within sight of the South Sea, at the western entrance of the Strait of Magellan, and from thence returned by different routes to England.

In the latter part of the year 1767, it was resolved by the Royal Society, that it would be proper to send persons into some part of the South Sea to observe a transit of the planet Venus over the sun's disc, which, according to astronomical calculation, would happen in the year 1769; and that the islands called Marquesas de Mendoza, or those of Rotterdam or Amsterdam,[2] were the properest places then known for making such observation.

[Footnote 2: So called by Tasman, but by the natives Anamooka and Tongataboo; they belong to that large cluster which Cook named the Friendly Isles.--E.]

In consequence of these resolutions, it was recommended to his majesty, in a memorial from the Society, dated February, 1768, that he would be pleased to order such an observation to be made; upon which his majesty signified to the lords commissioners of the Admiralty his pleasure that a ship should be provided to carry such observers as the society should think fit to the South Seas; and, in the beginning of April following, the society received a letter from the secretary of the Admiralty, informing them that a bark of three hundred and seventy tons had been taken up for that purpose....