A General History and Collection of Voyages and Travels - Volume 06 Arranged in Systematic Order: Forming a Complete History of the Origin and Progress of Navigation, Discovery, and Commerce, by Sea and Land, from the Earliest Ages to the Present Time 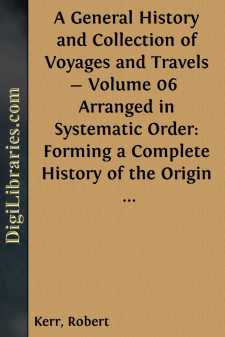 Although we have already, in the Introduction to the Second Chapter of this Book, Vol. III. p. 346. given some notices of the voyages of John and Sebastian Cabot to America in the service of Henry VII. and VIII. it appears proper on the present occasion to insert a full report of every thing that is now known of these early navigations: As, although no immediate fruits were derived from these voyages, England by their means became second only to Spain in the discovery of America, and afterwards became second likewise in point of colonization in the New World. The establishments of the several English colonies will be resumed in a subsequent division of our arrangement.

It has been already mentioned that Columbus, on leaving Portugal to offer his services to Ferdinand and Isabella of Spain for the discovery of the Indies by a western course through the Atlantic, sent his brother Bartholomew to make a similar offer to Henry VII. King of England, lest his proposals might not have been listened to by the court of Spain. Bartholomew, as has been formerly related, was taken by pirates; and on his arrival in England was forced to procure the means of living, and of enabling himself to appear before the king, by the construction and sale of sea-charts and maps, in which he had been instructed by his brother. Owing to this long delay, when he at length presented himself to King Henry, and had even procured the acceptance of his brothers proposals, so much time had been lost that Isabella queen of Castille had already entered into the views of his illustrious brother, who had sailed on his second voyage to the West Indies, while Bartholomew was on his journey through France to announce to him that Henry King of England had agreed to his proposals.

The fame of the astonishing discovery made by Columbus in 1591, soon spread throughout Europe; and only four years afterwards, or in 1595, a patent was granted by Henry VII. to John Cabot, or Giovani Cabota, a Venetian citizen, then resident in England, and his three sons, Lewis, Sebastian, and Sancius, and their heirs and deputies, to sail to all parts countries and seas of the east west and north, at their own cost and charges, with five ships; to seek out discover and find whatsoever islands, countries, regions, or provinces belonging to the heathen and infidels, were hitherto unknown to Christians, and to subdue, occupy, and possess all such towns, cities, castles, and islands as they might be able; setting up the royal banners and ensigns in the same, and to command over them as vassals and lieutenants of the crown of England, to which was reserved the rule, title, and jurisdiction of the same. In this grant Cabot and his sons, with their heirs and deputies, were bound to bring all the fruits, profits, gains, and commodities acquired in their voyages to the port of Bristol; and, having deducted from the proceeds all manner of necessary costs and charges by them expanded, to pay to the king in wares or money the fifth part of the free gain so made, in lieu of all customs of other dues; of importation on the same....