A General History and Collection of Voyages and Travels - Volume 03 Arranged in Systematic Order: Forming a Complete History of the Origin and Progress of Navigation, Discovery, and Commerce, by Sea and Land, from the Earliest Ages to the Present Time 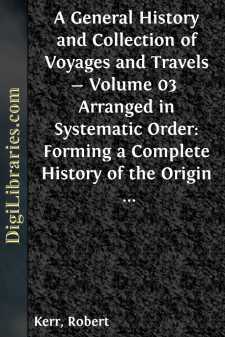 HISTORY OF THE DISCOVERY OF AMERICA, BY CHRISTOPHER COLUMBUS; WRITTEN BY HIS SON DON FERDINAND COLUMBUS[1].

The whole of this chapter contains an original record, being a distinct narrative of the discovery of America by COLUMBUS, written by his own son, who accompanied him in his latter voyages. It has been adopted into the present work from the Collection of Voyages and Travels published at London in 1704, by Awnsham and John Churchill, in four volumes folio; in which it is said to have been translated from the original Italian of Don Ferdinand Columbus, expressly for the use of that work. The language of that translation is often obscure and ungrammatical, as if the work of a foreigner; but, having no access to the original, has necessarily been adopted for the present occasion, after being carefully revised and corrected. No farther alteration has been taken with that version, except a new division into sections, instead of the prolix and needlessly minute subdivision of the original translation into a multitude of chapters; which change was necessary to accommodate this interesting original document to our plan of arrangement; and except in a few rare instances, where uninteresting controversial argumentations have been somewhat abridged, and even these chiefly because the original translator left the sense obscure or unintelligible, from ignorance of the language or of the subject.

It is hardly necessary to remark, that the new grand division of the world which was discovered by this great navigator, ought from him to have been named COLUMBIA. Before setting out upon this grand discovery, which was planned entirely by his own transcendent genius, he was misled to believe that the new lands he proposed to go in search of formed an extension of the India, which was known to the ancients; and still impressed with that idea, occasioned by the eastern longitudes of Ptolemy being greatly too far extended, he gave the name of West Indies to his discovery, because he sailed to them westwards; and persisted in that denomination, even after he had certainly ascertained that they were interposed between the Atlantic ocean and Japan, the Zipangu, or Zipangri of Marco Polo, of which and Cathay or China, he first proposed to go in search.

Between the third and fourth voyages of COLUMBUS, Ojeda, an officer who had accompanied him in his second voyage, was surreptitiously sent from Spain, for the obvious purpose of endeavouring to curtail the vast privileges which had been conceded to Columbus, as admiral and viceroy of all the countries he might discover; that the court of Spain might have a colour for excepting the discoveries made by others from the grant which had been conferred on him, before its prodigious value was at all thought of. Ojeda did little more than revisit some of the previous discoveries of Columbus: Perhaps he extended the knowledge of the coast of Paria....