A General History and Collection of Voyages and Travels - Volume 02 Arranged in Systematic Order: Forming a Complete History of the Origin and Progress of Navigation, Discovery, and Commerce, by Sea and Land, from the Earliest Ages to the Present Time 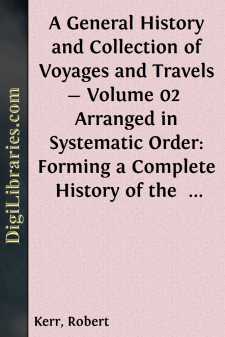 Account of Various early Pilgrimages from England to the Holy Land; between the years 1097 and 1107 [1].

The subsequent account of several English pilgrimages to the Holy Land.

The Voyage of Gutuere, or Godwera, an English Lady, towards the Holy Land, about 1097.

While the Christian army, under Godfrey of Buillon, was marching through Asia Minor from Iconium, in Lycaonia, by Heraclea, to Marasia, or Maresch[1], Gutuere, or Godwera, the wife of Baldwin, the brother of the Duke of Lorain, who had long laboured under heavy sickness, became so extremely ill, that the army encamped on her account near Marash, for three days, when she expired. This lady is said to have been of noble English parentage, and was honourably interred at Antioch in Syria[2].

Edgar, commonly called Aethling, was son of Edward, the son of Edmond Ironside, who was the brother of Edward the Confessor, to whom consequently Edgar was nephew; Edgar travelled to Jerusalem in 1102, in company with Robert, the son of Godwin, most valiant knight. Being present in Rama, when King Baldwin was there besieged by the Turks, and not being able to endure the hardships of the siege, he was delivered from that danger, and escaped through the midst of the hostile camp, chiefly through the aid of Robert; who, going before him, made a lane with his sword, slaying numbers of the Turks in his heroic progress. Towards the close of this chivalric enterprize, and becoming more fierce and eager as he advanced, Robert unfortunately dropt his sword; and while stooping to recover his weapon, he was oppressed by the multitude, who threw themselves upon him, and made him prisoner. From thence, as some say, Robert was carried to Babylon in Egypt, or Cairo; and refusing to renounce his faith in CHRIST, he was tied to a stake in the market-place, and transpierced with arrows. Edgar, having thus lost his valiant knight, returned towards Europe, and was much honoured with many gifts by the emperors both of Greece and Germany, both of whom would gladly have retained him at their courts, on account of his high lineage; but he despised all things, from regard to his native England, into which he returned: And, having been subjected to many changes of fortune, as we have elsewhere related, he now spends his extreme old age in private obscurity.

Some Circumstances respecting the Siege of Joppa, about the year 1102 [1].

In the second year of Baldwin, king of Jerusalem, Joppa was besieged by the Turks of Cairo; and Baldwin embarked from the town of Assur, in a vessel called a buss , commanded by one Goderic an English freebooter, intending to proceed to the relief of the besieged....