A Critical Exposition of the Popular 'Jihad' Showing that all the Wars of Mohammad Were Defensive; and that Aggressive War, or Compulsory Conversion, is not Allowed in The Koran - 1885 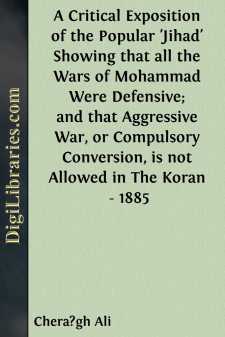 Add to My Favorites
Published: 10 years ago
Downloads: 93
Rating: (0 Votes)

INTRODUCTION. Object of the book.

1. In publishing this work, my chief object is to remove the general and erroneous impression from the minds of European and Christian writers regarding Islam, that Mohammad waged wars of conquest, extirpation, as well as of proselytizing against the Koreish, other Arab tribes, the Jews, and Christians; that he held the Koran in one hand and the scimitar in the other, and compelled people to believe in his mission. I have endeavoured in this book, I believe on sufficient grounds, to show that neither the wars of Mohammad were offensive, nor did he in any way use force or compulsion in the matter of belief.

Early wrongs of the Moslems. Justification in taking up arms, if taken.

2. All the wars of Mohammad were defensive. He and those who took interest in his cause were severely oppressed at intervals, and were in a sort of general persecution at Mecca at the hands of the ungodly and fierce Koreish. Those who were weak and without protection had to leave their city, and twice fly to the Christian land of Abyssinia, pursued by the wrathful Koreish, but in vain. Those who remained at Mecca were subject to all sorts of indignities, malignity and a deprivation of all religious and social liberty, because they had forsaken the inferior deities of the Koreish, and believed in the only ONE GOD of Mohammad, in whose mission they had full belief. Mohammad and his followers had every sanction, under the natural and international law, then and there to wage war against their persecutors with the object of removing the (fitnah) persecution and obtaining their civil rights of freedom and religious liberty in their native city.

Commencement of the state of war. The Koreish being public enemies were liable to be treated as such.

3. The fierce persecutions renewed by the Koreish at the time of the expulsion of the Moslems from Mecca were acts of hostility tantamount to a declaration of war. From that time commenced the state of war between the parties. In the Arab society at Mecca there was neither an organized Government, nor any distinction between a public and private person and property. There was no regular army in the State, and what existed was not a permanently organized body, so provided with external marks that it could be readily identified. The form of Government at Mecca was patriarchal, and the chiefs of the Koreish and the citizens of Medina themselves constituted an army when occasion arose. Therefore, since the commencement of hostilities or the state of war, every individual of the Koreish or the Meccans was a public enemy of the Moslems, and liable to be treated as such in his person and property, except those who were unable to take part in the hostilities, or, as a matter of fact, abstained from engaging in them. Therefore it was lawful for the Moslems to threaten or to waylay the caravans of the enemy, which passed to and from Mecca close to Medina, and also to attack the Koreish at Mecca, if they could possibly do so.

But the Moslems could not take up arms to redress their wrongs under certain circumstances.

4. But as the people amongst whom the Prophet and his fugitive Moslems now sojourned had only pledged to defend them at Medina, the flying Mohammadans could not take up arms against their aggressors, the Koreish, to defend their rights of religious liberty and citizenship, much less of taking arms to compel the non-believers to believe in Moslem faith, and so they preferred to live in peace at Medina, and enjoy the blessings of their new religion without any disturbance from without, if possible....