Woman on the American Frontier A Valuable and Authentic History of the Heroism, Adventures, Privations, Captivities, Trials, and Noble Lives and Deaths of the "Pioneer Mothers of the Republic" 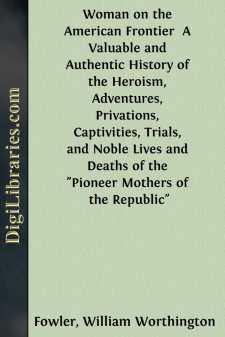 The history of our race is the record mainly of men's achievements, in war, in statecraft and diplomacy. If mention is made of woman it is of queens and intriguing beauties who ruled and schemed for power and riches, and often worked mischief and ruin by their wiles.

The story of woman's work in great migrations has been told only in lines and passages where it ought instead to fill volumes. Here and there incidents and anecdotes scattered through a thousand tomes give us glimpses of the wife, the mother, or the daughter as a heroine or as an angel of kindness and goodness, but most of her story is a blank which never will be filled up. And yet it is precisely in her position as a pioneer and colonizer that her influence is the most potent and her life story most interesting.

The glory of a nation consists in its migrations and the colonies it plants as well as in its wars of conquest. The warrior who wins a battle deserves a laurel no more rightfully than the pioneer who leads his race into the wilderness and builds there a new empire.

The movement which has carried our people from the Atlantic to the Pacific Ocean and in the short space of two centuries and a half has founded the greatest republic which the world ever saw, has already taken its place in history as one of the grandest achievements of humanity since the world began. It is a moral as well as a physical triumph, and forms an epoch in the advance of civilization. In this grand achievement, in this triumph of physical and moral endurance, woman must be allowed her share of the honor.

It would be a truism, if we were to say that our Republic would not have been founded without her aid. We need not enlarge on the necessary position which she fills in human society every where. We are to speak of her now as a soldier and laborer, a heroine and comforter in a peculiar set of dangers and difficulties such as are met with in our American wilderness. The crossing of a stormy ocean, the reclamation of the soil from nature, the fighting with savage men are mere generalities wherein some vague idea may be gained of true pioneer life. But it is only by following woman in her wanderings and standing beside her in the forest or in the cabin and by marking in detail the thousand trials and perils which surround her in such a position that we can obtain the true picture of the heroine in so many unmentioned battles.

The recorded sum total of an observation like this would be a noble history of human effort. It would show us the latent causes from which have come extraordinary effects. It would teach us how much this republic owes to its pioneer mothers, and would fill us with gratitude and self-congratulation—gratitude for their inestimable services to our country and to mankind, self-congratulation in that we are the lawful inheritors of their work, and as Americans are partakers in their glory.

In the preparation of this work particular pains have been taken to avoid what was trite and hackneyed, and at the same time preserve historic truth and accuracy....