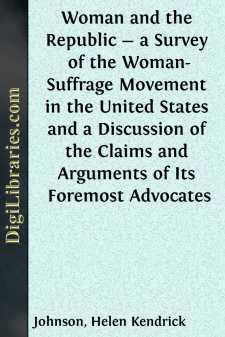 The introduction to the "History of Woman Suffrage," published in 1881-85, edited by Elizabeth Cady Stanton, Susan B. Anthony and Matilda Joslyn Gage, contains the following statement: "It is often asserted that, as woman has always been man's slave, subject, inferior, dependent, under all forms of government and religion, slavery must be her normal condition; but that her condition is abnormal is proved by the marvellous change in her character, from a toy in the Turkish harem, or a drudge in the German fields, to a leader of thought in the literary circles of France, England, and America."

I have made this quotation partly on account of its direct application to the subject to be discussed, and partly to illustrate the contradictions that seem to inhere in the arguments on which the claim to Woman Suffrage is founded. If woman has become a leader of thought in the literary circles of the most cultivated lands, she has not always been man's slave, subject, inferior, dependent, under all forms of government and religion; and, furthermore, it is not true that there has been such a marvellous change in her character as is implied in this statement. Where man is a bigot and a barbarian, there, alas! woman is still a harem toy; where man is little more than a human clod, woman is to-day a drudge in the field; where man has hewn the way to governmental and religious freedom, there woman has become a leader of thought. The unity of race progress is strikingly suggested by this fact. The method through which that unity is maintained should unfold itself as we study the story of the sex advancement of our time.

Progress is a magic word, and the Suffrage party has been fortunate in its attempt to invoke the sorcery of the thought that it enfolds, and to blend it with the claim of woman to share in the public duty of voting. Possession of the elective franchise is a symbol of power in man's hand; why should it not bear the same relation to woman's upward impulse and action? Modern adherents ask, "Is not the next new force at hand in our social evolution to come from the entrance of woman upon the political arena?" The roots of these questions, and consequently of their answers, lie as deep as the roots of being, and they cannot be laid bare by superficial digging. But the laying bare of roots is not the only way, or even the best way, to judge of the strength and beauty of a growth. We look at the leaves, the flowers, and the fruit. "Movement" and "Progress" are not synonymous terms. In evolution there is degeneration as well as regeneration. Only the work that has been in accord with the highest ideals of woman's nature is fitted to the environment of its advance, and thus to survival and development. In order to learn whether Woman Suffrage is in the line of advance, we must know whether the movement to obtain it has thus far blended itself with those that have proved to be for woman's progress and for the progress of government.

I am sure I need not emphasize the fact that, in studying some of the principles that underlie the Suffrage movement, I am not impugning the motives of the leaders....