Witchcraft and Devil Lore in the Channel Islands Transcripts from the Official Records of the Guernsey Royal Court, with an English Translation and Historical Introduction 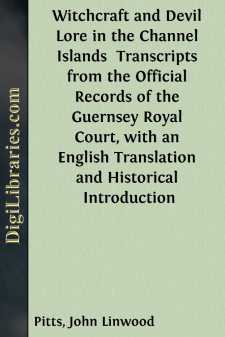 The Witchcraft superstitions of the Channel Islands, sad as they were in their characteristics and results—as is abundantly evidenced by our judicial records—were but a part and parcel of that vast wave of unreasoning credulity which swept across the civilised world during the Middle Ages, and more or less affected every class of society, and all sorts and conditions of men. From the lists given in the following pages (pp. -32), it will be seen that in about seventy-one years, during the reigns of Elizabeth, James I. and Charles I., no fewer than seventy-eight persons—fifty-eight of them being women, and twenty of them men—were brought to trial for Sorcery in Guernsey alone. Out of these unfortunate victims, three women and one man appear to have been burnt alive; twenty-four women and four men were hanged first and burnt afterwards; one woman was hanged for returning to the island after being banished; three women and one man were whipped and had each an ear cut off; twenty-two women and five men were banished from the island; while five women and three men had the good fortune to be acquitted. Most of these accused persons were natives of Guernsey, but mention is made of one woman from Jersey, of three men and a woman from Sark, and of a man from Alderney.

With regard to the gatherings at the so-called Witches' Sabbaths, there can be no doubt that—quite apart from the question of any diabolic presence at such meetings—very questionable assemblies of people did take place at intervals among the inhabitants of many countries. Probably these gatherings first had their rise in the old pagan times, and were subsequently continued from force of habit, long after their real origin and significance had been forgotten. Now, it would be very easy for these orgies to become associated—particularly in the then superstitious condition of the popular mind—with the actual bodily presence of the Devil as one of the participants; while it is also not improbable that, in some cases at least, heartless and evil-minded persons worked upon the prevailing credulity to further their own nefarious purposes. Our esteemed Bailiff has offered a suggestion or two of considerable value on this point with regard to certain Guernsey phases of the superstition. He thinks it highly probable that some of these deluded women were actually the dupes of unprincipled and designing men, who arrayed themselves in various disguises and then met their unfortunate victims by appointment. This idea is, indeed, borne out to a great extent by some of the particulars stated in the following confessions. For instance, some of the women assert that when they met the Devil he was in the form of a dog, but rather larger; he always stood upon his hind legs—probably the man's feet; and, when he shook hands with them, his paw felt like a hand—doubtless it was a hand. Another suggestion of the Bailiff's is also worth notice. It is that the black ointment so often mentioned as being rubbed on the bodies of the so-called witches, had a real existence, and may have been so compounded as to act as a narcotic or intoxicant, and produce a kind of extatic condition, just as the injection of certain drugs beneath the skin is known to do now....