Where Half The World Is Waking Up The Old and the New in Japan, China, the Philippines, and India, Reported With Especial Reference to American Conditions 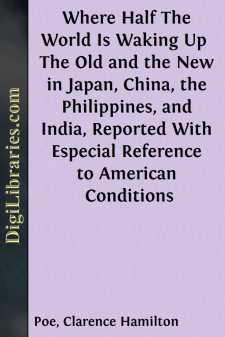 "The human race, to which so many of my readers belong," as Mr. Gilbert Chesterton begins one of his books by saying, has half its members in Asia. That Americans should know something about so considerable a portion of our human race is manifestly worth while. And really to know them at all we must know them as they are to-day.

Vast changes are in progress, and even as I write this, the revolution in China, foreshadowed in the chapters written by me from that country, is remaking the political life of earth's oldest empire. From Japan to India there is industrial, educational, political ferment. The old order changes, yielding place to the new.

"Where Half the World is Waking Up" is not inappropriate therefore as the title of the book now offered to the public. The reader will kindly observe here that I have written of where half the world is waking up and not merely of the waking-up itself. My purpose has been to set forth the old and the new in due proportion; to present the play of new forces against and upon the ancient, the amazingly ancient, forces that have dominated whole races for centuries. In most places, in fact, the ancient force is still clearly the dominant one. Observe, too, therefore, that I have written not of where half the world has waked up, but only of where it is waking up. The significant thing is that the waking is really taking place at all, and of this there can be no doubt.

It was, in short, with the hope of securing for myself and presenting to others a photograph of the Orient as it is to-day that I made my long trip through Japan, Korea, Manchuria, {viii} China, the Philippines, and India during the past year. It was not a pleasure trip nor yet a hurried "seaport trip." I travelled either entirely across or well into the interior of each country visited, and all my time was given to study and research to fit me for the preparation of these articles.

That despite of the care exercised the book contains some errors, is doubtless true. The sources of information in the Orient are not always easy to find, nor always in accord after one finds them. Consider, for example, the population of Manchuria: it seems a simple enough matter, yet it required the help of consuls of two or three nations to enable me to sift out the truth from the conflicting representations of several writers and so-called authorities.

For my part I can only claim a laborious and painstaking effort to get the facts. Letters of introduction to eminent Englishmen kindly furnished me by Ambassador Bryce opened the doors of British officialdom for me, and the friendship of Mr. Roosevelt and letters from Mr. Bryan and our Department of State proved helpful in other ways. I thus had the good fortune not only to get the ready fraternal assistance of my brother newspaper men (of all races) everywhere, and the help of English, German, and American consuls, but I was aided by some of the most eminent authorities in each country visited--in China, by H. E. Tang Shao-yi, Wu Ting Fang, Sir Robert Bredon, Dr....