Westward Ho!, or, the voyages and adventures of Sir Amyas Leigh, Knight, of Burrough, in the county of Devon, in the reign of her most glorious majesty Queen Elizabeth 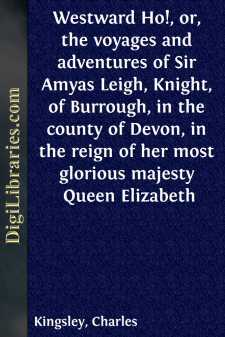 CHAPTER I HOW MR. OXENHAM SAW THE WHITE BIRD "The hollow oak our palace is,Our heritage the sea."

All who have travelled through the delicious scenery of North Devon must needs know the little white town of Bideford, which slopes upwards from its broad tide-river paved with yellow sands, and many-arched old bridge where salmon wait for autumn floods, toward the pleasant upland on the west. Above the town the hills close in, cushioned with deep oak woods, through which juts here and there a crag of fern-fringed slate; below they lower, and open more and more in softly rounded knolls, and fertile squares of red and green, till they sink into the wide expanse of hazy flats, rich salt-marshes, and rolling sand-hills, where Torridge joins her sister Taw, and both together flow quietly toward the broad surges of the bar, and the everlasting thunder of the long Atlantic swell. Pleasantly the old town stands there, beneath its soft Italian sky, fanned day and night by the fresh ocean breeze, which forbids alike the keen winter frosts, and the fierce thunder heats of the midland; and pleasantly it has stood there for now, perhaps, eight hundred years since the first Grenville, cousin of the Conqueror, returning from the conquest of South Wales, drew round him trusty Saxon serfs, and free Norse rovers with their golden curls, and dark Silurian Britons from the Swansea shore, and all the mingled blood which still gives to the seaward folk of the next county their strength and intellect, and, even in these levelling days, their peculiar beauty of face and form.

But at the time whereof I write, Bideford was not merely a pleasant country town, whose quay was haunted by a few coasting craft. It was one of the chief ports of England; it furnished seven ships to fight the Armada: even more than a century afterwards, say the chroniclers, "it sent more vessels to the northern trade than any port in England, saving (strange juxtaposition!) London and Topsham," and was the centre of a local civilization and enterprise, small perhaps compared with the vast efforts of the present day: but who dare despise the day of small things, if it has proved to be the dawn of mighty ones? And it is to the sea-life and labor of Bideford, and Dartmouth, and Topsham, and Plymouth (then a petty place), and many another little western town, that England owes the foundation of her naval and commercial glory. It was the men of Devon, the Drakes and Hawkins', Gilberts and Raleighs, Grenvilles and Oxenhams, and a host more of "forgotten worthies," whom we shall learn one day to honor as they deserve, to whom she owes her commerce, her colonies, her very existence. For had they not first crippled, by their West Indian raids, the ill-gotten resources of the Spaniard, and then crushed his last huge effort in Britain's Salamis, the glorious fight of 1588, what had we been by now but a popish appanage of a world-tyranny as cruel as heathen Rome itself, and far more devilish?

It is in memory of these men, their voyages and their battles, their faith and their valor, their heroic lives and no less heroic deaths, that I write this book; and if now and then I shall seem to warm into a style somewhat too stilted and pompous, let me be excused for my subject's sake, fit rather to have been sung than said, and to have proclaimed to all true English hearts, not as a novel but as an epic (which some man may yet gird himself to write), the same great message which the songs of Troy, and the Persian wars, and the trophies of Marathon and Salamis, spoke to the hearts of all true Greeks of old....