Watch and Clock Escapements A Complete Study in Theory and Practice of the Lever, Cylinder and Chronometer Escapements, Together with a Brief Account of the Origin and Evolution of the Escapement in Horology 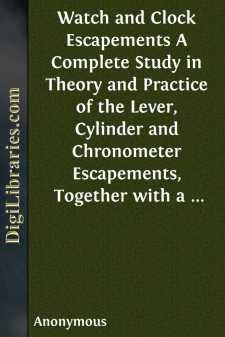 CHAPTER I. THE DETACHED LEVER ESCAPEMENT.

In this treatise we do not propose to go into the history of this escapement and give a long dissertation on its origin and evolution, but shall confine ourselves strictly to the designing and construction as employed in our best watches. By designing, we mean giving full instructions for drawing an escapement of this kind to the best proportions. The workman will need but few drawing instruments, and a drawing-board about 15" by 18" will be quite large enough. The necessary drawing-instruments are a T-square with 15" blade; a scale of inches divided into decimal parts; two pairs dividers with pen and pencil points—one pair of these dividers to be 5" and the other 6"; one ruling pen. Other instruments can be added as the workman finds he needs them. Those enumerated above, however, will be all that are absolutely necessary.

We shall, in addition, need an arc of degrees, which we can best make for ourselves. To construct one, we procure a piece of No. 24 brass, about 5-1/2" long by 1-1/4" wide. We show such a piece of brass at A, Fig. 1. On this piece of brass we sweep two arcs with a pair of dividers set at precisely 5", as shown (reduced) at a a and b b. On these arcs we set off the space held in our dividers—that is 5"—as shown at the short radial lines at each end of the two arcs. Now it is a well-known fact that the space embraced by our dividers contains exactly sixty degrees of the arcs a a and b b, or one-sixth of the entire circle; consequently, we divide the arcs a a and b b into sixty equal parts, to represent degrees, and at one end of these arcs we halve five spaces so we can get at half degrees.

Before we take up the details of drawing an escapement we will say a few words about "degrees," as this seems to be something difficult to understand by most pupils in horology when learning to draw parts of watches to scale. At Fig. 2 we show several short arcs of fifteen degrees, all having the common center g. Most learners seem to have an idea that a degree must be a specific space, like an inch or a foot. Now the first thing in learning to draw an escapement is to fix in our minds the fact that the extent of a degree depends entirely on the radius of the arc we employ. To aid in this explanation we refer to Fig. 2. Here the arcs c, d, e and f are all fifteen degrees, although the linear extent of the degree on the arc c is twice that of the degree on the arc f. When we speak of a degree in connection with a circle we mean the one-three-hundred-and-sixtieth part of the periphery of such a circle. In dividing the arcs a a and b b we first divide them into six spaces, as shown, and each of these spaces into ten minor spaces, as is also shown. We halve five of the degree spaces, as shown at h. We should be very careful about making the degree arcs shown at Fig. 1, as the accuracy of our drawings depends a great deal on the perfection of the division on the scale A. In connection with such a fixed scale of degrees as is shown at Fig....