Unknown Mexico, Volume 1 (of 2) A Record of Five Years' Exploration Among the Tribes of the Western Sierra Madre; In the Tierra Caliente of Tepic and Jalisco; and Among the Tarascos of Michoacan 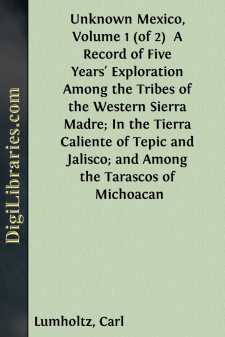 Heavy floods in the southern part of Arizona and New Mexico, with consequent wash-outs along the railroads, interfered with my plans and somewhat delayed my arrival at Bisbee, Arizona, a small but important mining place from which I had decided to start my expedition. It is only some twenty odd miles from the Mexican border, and the Copper Queen Company maintains there well-supplied stores, where the necessary outfit, provisions, etc., could be procured. The preparations for the start consumed more than two weeks. Animals had to be bought, men selected and hired, provisions purchased and packed. In the meantime [2] I was joined by the various scientific assistants appointed to take part in the expedition.

The horses and mules were bought in the neighbourhood. In purchasing animals much caution is required in that part of the country, as even men who pose as gentlemen will try to take advantage of the situation. One such individual not only raised his prices, but delivered unbroken animals. Much loss of time and endless annoyance were caused, first in the camp and later on the road, by unruly mules, that persistently threw off their packs and had to be subdued and reloaded.

Gradually, I had succeeded in finding the necessary men; This was another hard task to accomplish. There are always plenty of fellows, ready for adventures, greedy to earn money, and eager to join such an expedition. But to select the right ones among the cow-boys and miners of the border lands is most difficult.

By what appears, furthermore, to be the compensating justice of Nature, the treasures of the earth are always hidden in the most unattractive, dismal, and dreary spots. At least all the mining places I ever visited are so located, and Bisbee is no exception. To get away from the cramped little village and its unsavoury restaurant, I established my first camp four miles south of it on a commodious and pleasant opening, where we could do our own cooking. But here a new annoyance, and rather a curious one, was met with. The cattle of the region evinced a peculiar predilection for our wearing apparel. Especially at night, the cows would come wandering in among our tents, like the party who goes about seeking what he may devour, and on getting hold of some such choice morsel as a sock, shirt, or blanket, Mrs. Bossie would chew and chew, “gradually,” to quote Mark Twain, “taking it in, all the while opening and [3] closing her eyes in a kind of religious ecstasy, as if she had never tasted anything quite as good as an overcoat before in her life.” It is no use arguing about tastes, not even with a cow....