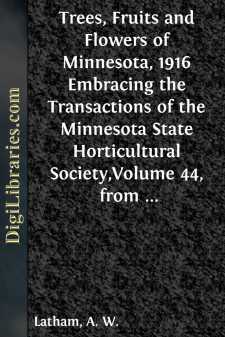 This is the forty-ninth annual meeting of the Minnesota State Horticultural Society. Nearly half a century has elapsed since that little band of pioneers met in Rochester and organized that they might work out a problem that had proven too difficult for any of them to handle single handed and alone. Those men were all anxious to raise at least sufficient fruit for themselves and families. They had tried and failed. They were not willing to give up. They knew they could accomplish more by interchanging ideas, and, furthermore, if they were able to learn anything by experience they wanted to pass it on to their neighbors.

Those men built better than they knew. The foundation was properly laid, and the structure, while not finished, is an imposing one. A great many people believe that this structure has been completed, that we have reached our possibilities in fruit raising. This is only half true. We are still building on this splendid foundation erected by those few enthusiasts.

None of those men are left to enjoy the benefits of their labor. The present generation and the generations to come are and will be the beneficiaries, and I believe as a tribute to their memory and the good that they have done that we should fittingly celebrate our fiftieth anniversary. At this time I can not suggest how this should be done; I simply make this suggestion in hopes that it may be worked out.

I was in hopes that a home for this society might have been erected this year or at least made ready for the 1916 meeting. This would surely have been an occasion worthy of the anniversary which we hope to celebrate.

The building committee appointed by the last meeting went before the legislature and tried with all the eloquence at their command to make the members of the legislature see the necessity of appropriating sufficient money to build a permanent home for this organization. The members saw the force of our argument, but we could not convince a majority of the appropriation committee that they should deviate from their plan of retrenchment which seemed to permeate their every act.

We were disappointed but not disheartened. We were promised better success in the 1917 session. So we are living in hopes, and I firmly believe that if our efforts are renewed at that time that this and the auxiliary societies may have an opportunity of meeting and transacting business in a home that, while it will belong to the state, will be for the use of these organizations, and that we may be able to take up our abode in it not later than the winter meeting of 1917.

Secretary Latham has prepared an excellent program for you. Many friends of this society are with us again, full of enthusiasm and vigor, and I know that we will have one of the most successful meetings ever enjoyed by this organization.

Owing to the fullness of the program, I should consider it an imposition on my part if I should attempt to make an extended address at this time and will hasten to call on the gentlemen who are to contribute to the success of this meeting.