Transactions of the American Society of Civil Engineers, vol. LXX, Dec. 1910 Federal Investigations of Mine Accidents, Structural Materials and Fuels. Paper No. 1171 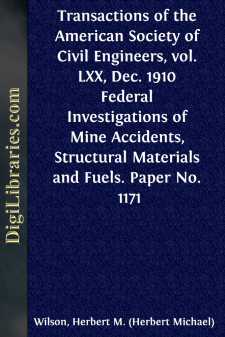 The mine disaster, which occurred at Cherry, Ill., on November 13th, 1909, when 527 men were in the mine, resulting in the entombment of 330 men, of whom 310 were killed, has again focused public attention on the frequent recurrence of such disasters and their appalling consequences. Interest in the possible prevention of such disasters, and the possible means of combating subsequent mine fires and rescuing the imprisoned miners, has been heightened as it was not even by the series of three equally extensive disasters which occurred in 1907, for the reason that, after the Cherry disaster, 20 men were rescued alive after an entombment of one week, when practically all hope of rescuing any of the miners had been abandoned.

This accident, occurring, as it does, a little more than 1½ years after the enactment of legislation by Congress instructing the Director of the United States Geological Survey to investigate the causes and possible means of preventing the loss of life in coal-mining operations, makes this an opportune time to review what has been done by the Geological Survey during this time, toward carrying out the intent of this Act.

It may be stated with confidence, that had such a disaster occurred a year or more ago, all the entombed men must have perished, as it would have been impossible to enter the mine without the protection afforded by artificial respiratory apparatus. Moreover, but for the presence of the skilled corps of Government engineers, experienced by more than a year’s training in similar operations in more than twenty disasters, the mine would have been sealed until the fire had burned out, and neither the dead, nor those who were found alive, would have been recovered for many weeks. In the interval great suffering and loss would have been inflicted on the miners, because of enforced idleness, and on the mine owners because of continued inability to re-open and resume operations.

Character of the Work.—The United States Geological Survey has been engaged continuously since 1904 in conducting investigations relating to structural materials, such as stone, clay, cement, etc., and in making tests and analyses of the coals, lignites, and other mineral fuel substances, belonging to, and for the use of, the Government.

Incidentally, the Survey has been considering means to increase efficiency in the use of these resources as fuels and structural materials, in the hope that the investigations will lead to their best utilization.

These inquiries attracted attention to the waste of human life incident to the mining of fuel and its preparation for the market, with the result that, in May, 1908, provision was made by Congress for investigations into the causes of mine explosions with a view to their prevention.

Statistics collected by the Geological Survey show that the average death rate in the coal mines of the United States from accidents of all kinds, including gas and dust explosions, falls of roof, powder explosions, etc., is three times that of France, Belgium, or Germany....