by John A. Bensel 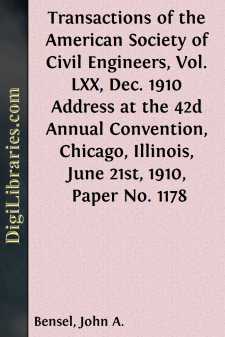 I know that to some of my audience a satisfactory address at a summer convention would be like that which many people regard as a satisfactory sermon—something soothing and convincing, to the effect that you are not as other men are, but better. While I appreciate very fully, however, the honor of being able to address you, I am going to look trouble in the face in an effort to convince you that, in spite of great individual achievements, engineers are behind other professional men in professional spirit, and particularly in collective effort.

Whether this, if true, is due to our extreme youth as a profession, or our extreme age, is dependent upon the point of view; but I think it is a fact that will be admitted by all that engineers have not as yet done much for their profession, even if they have done considerable for the world at large.

Looking backward, our calling may properly be considered the oldest in the world. It is older, in fact, than history itself, for man did not begin to separate from the main part of animal creation, until he began to direct the sources of power in Nature for the benefit, if not always for the improvement, of his particular kind. In Bible history, we find early mention of the first builder of a pontoon. This creditable performance is especially noted, and the name of the party principally concerned prominently mentioned. The same thing cannot be said of the unsuccessful attempt at the building of the first sky-scraper, for here the architect, with unusual modesty, has not given history his name, this omission being possibly due to the fact that the building was unsuccessful. If an engineer was employed on this particular undertaking, the architect had, even at that early stage of his profession, learned the lesson of keeping all except his own end of the work in the background.

The distinctive naming of our profession does not seem, however, to go back any farther than the period of 1761, when that Father of the Profession, John Smeaton, first made use of the term, "engineer," and later, "civil engineer," applying it both to others and to himself, as descriptive of a certain class of men working along professional lines now existing and described by that term.

Remarkable progress has certainly been made in actual achievements since that time, and I know of nothing more impressive than to contemplate the tremendous changes that have been made in the material world by the achievements of engineers, particularly in the last hundred years. This was forcibly impressed upon me a short time ago, while in the company of the late Charles Haswell, then the oldest member of this Society, who, seeing one of the recently built men-of-war coming up the harbor, remarked that he had designed the first steamship for the United States Navy. The evolution of this intricate mass of mechanism, which, from the very beginning of its departure from the sailing type of vessel, has taken place entirely within the working period of one man's life, is as graphic a showing of engineering activity as I think can be found.

Our activities are forcibly shown in many other lines of invention and in the utilization of the forces of Nature, particularly in the development of this country. We, although young in years, have become the greatest railroad builders in history, and have put into use mechanical machines like the harvester, the sewing machine, the telephone, the wireless telegraph, and almost numberless applications of electricity. Ships have been built of late years greatly departing from those immediately preceding them, so that at the present time they might be compared to floating cities with nearly all a city's conveniences and comforts....