Thirteen Months in the Rebel Army Being a Narrative of Personal Adventures in the Infantry, Ordnance, Cavalry, Courier, and Hospital Services; With an Exhibition of the Power, Purposes, Earnestness, Military Despotism, and Demoralization of the South 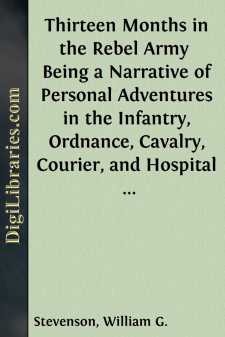 CHAPTER I. HOW I VOLUNTEERED.

Having spent my boyhood near Louisville, Kentucky, and falling in love with the character of the young men of that chivalric State, I found my way back to that region in the beginning of the year 1861, from my home in the city of New York. In March, I went down the Mississippi river to seek a school, and stopped in Arkansas, where I hoped to find a relative who was engaged in teaching. Failing to find either my kinsman or a remunerative school, I entered into partnership with a young man from Memphis named George Davis, for the purpose of getting out wine-cask staves, to be shipped to New Orleans and from thence to France. We located in Phillips county, Arkansas, bordering on the St. Francis river, more than 100 miles from Memphis. The venture proved profitable, and with five hired hands—Frenchmen—we were making money fast enough to satisfy a moderate ambition, and I had time to look about me and study the various phases of Arkansas society.

Frequent log-rollings—meetings of the neighbors to clear away the dead timber which falls during the winter—brought me into contact with the citizens for miles around. All sought acquaintance with the stranger youth, and were generally courteous and friendly. In trials of strength and skill, I occasionally gained an advantage which made me friends among the older, but evidently waked up envy in the breasts of some of the rougher young men. My refusal to drink with the crowd, also widened the breach which I noticed was forming without any cause on my part.

I was often sounded on the subject of slavery, which is the touchstone always used in the South to test the character of a new-comer. As a young man, I had no very fixed views upon the subject. I had the impression that where it existed it should be left to the control of those who were connected with it; and an outsider, as I was, had better keep hands off, so far at least as any direct efforts were concerned. Nor had I any disposition to promulgate the anti-slavery convictions of my boyhood, since I well knew they could have no good effect there; and as I had met a few radical and half-crazy men in the North, whom I could not avoid opposing, I was able to say some truthful things respecting them, which conciliated my questioners. Yet I would not include the great body of Northerners, whom I admitted I had met in my Kentucky residence (I hailed from Kentucky), as of that hated class called by them "abolitionist;" hence they still looked upon me with a shade of suspicion.

Freedom of opinion in the South upon this subject is not tolerated for a moment, and no honest anti-slavery man was safe for an hour in that section. But as I was only a youth, they were willing to suppose I knew but little of the subject, and I thought that they were satisfied I was not a dangerous resident of their State. While things were in this condition I concluded to write to my parents, who I knew were anxious to hear from me; but I dared not direct a letter to New York, and hence inclosed it in an envelope to a friend near Louisville, Kentucky, with the request that he would "hand it to my father as soon as convenient," not doubting that he would direct and mail it to New York....